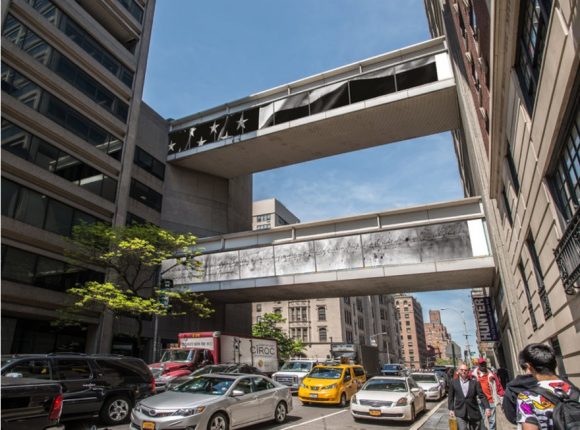 Faculty and students at Hunter College have been wondering what is going on with a display of the American flag on its sky bridges above Lexington Avenue.  It was just announced that the artist Robert Longo will open his “American Bridge Project,” which consists of vinyl renderings of the original First Amendment document and the American flag,  starting today and remaining until Dec. 1.  As reported by the New York Times:

“Mr. Longo, whose art is often politically charged, hopes to provide a daily reminder of the importance of unity and free speech.

To create this site-specific work, which was curated by Jill Brienza, Mr. Longo enlarged portions of two of his charcoal drawings, often visiting 68th Street to examine the possibilities of scope and color.

“It was really difficult to figure out what would work from a distance,” Mr. Longo said in an interview. “It’s like these slivers of images; they slice the sky. And bridges are metaphorically something we need politically more than ever.”

The lower piece, on the third-floor bridge, is based on his 2017 work “Untitled (First Amendment, September 25, 1789),” in which he drew the First Amendment by hand in an effort to convey its very human origins.

“People address the Constitution as if it was the Bible,” Mr. Longo said. “I was quite touched when I actually looked at it and realized it was written by someone with penmanship, by hand.”

The seventh-floor installation is based on Mr. Longo’s 2012 charcoal drawing “Untitled (Berlin Flag).”