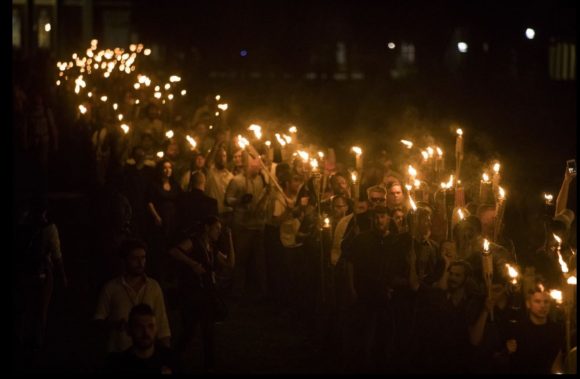 Various media are reporting that a group of white nationalists sparked outrage at the University of Virginia in Charlottesville last night after they marched with torches across campus while chanting Nazi expressions.  The demonstrators marched as a precursor to a Saturday protest planned to oppose the removal of a statue of Confederate General Robert E. Lee.

Marchers could be heard chanting slogans including “white lives matter” and “you will not replace us.” Others could be heard chanting “blood and soil,” a well-known Nazi rallying cry. Police eventually declared the protest an unlawful assembly and both protesters and counter protesters reported being pepper sprayed. Videos captured at the scene appeared to show counter protesters clashing with the white nationalists.

“As President of the University of Virginia, I am deeply saddened and disturbed by the hateful behavior displayed by torch-bearing protestors that marched on our Grounds this evening. I strongly condemn the unprovoked assault on members of our community, including University personnel who were attempting to maintain order.

Law enforcement continues to investigate the incident, and it is my hope that any individuals responsible for criminal acts are held accountable. The violence displayed on Grounds is intolerable and is entirely inconsistent with the University’s values.​​​​​​”

Charlottesville Mayor Mike Signer condemned the protest, which he called as a “cowardly parade of hatred, bigotry, racism, and intolerance marching down the lawns of the architect of our Bill of Rights, Thomas Jefferson”

“Everyone has a right under the First Amendment to express their opinion peaceably, so here’s mine: not only as the Mayor of Charlottesville, but as a UVA faculty member and alumnus, I am beyond disgusted by this unsanctioned and despicable display of visual intimidation on a college campus,” Signer said.

“We need an exorcism on the Lawn,” he added — referencing the area of campus where the protesters gathered.

Police have estimated that between 2,000 and 6,000 protesters and counter-protesters may descend on Charlottesville for Saturday’s rally, and an earlier protest held in July saw clashes between protest and counter protest groups. 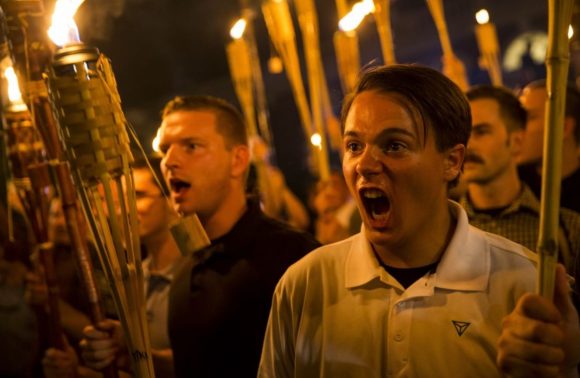