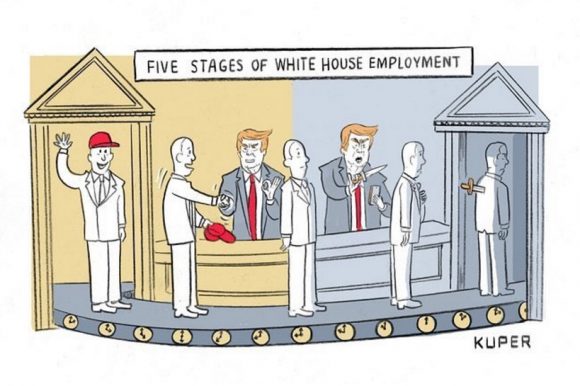 The New Yorker has just published the cartoon above depicting what it means to be employed and then unemployed at the Trump White House.  The timing for it is perfect after Reince Priebus was ousted as White House chief of staff yesterday, which followed Sean Spicer’s departure last week.

Peter Kuper’s cartoon shows the first figure as a potential employee wearing Trump’s unmistakable signature “Make America Great Again” red hat, and the final one is an employee leaving with a knife in his back.

It’s kind of scary but truth be told.

In the last six months, Trump has fired Acting Attorney General Sally Yates, U.S. Attorney Preet Bharara and FBI Director James Comey. And Priebus and Spicer both resigned under tumultuous circumstances. Right before Priebus’ departure, Scaramucci verbally attacked him, calling him a “paranoid schizophrenic, a paranoiac.” As for Spicer, he quit after telling Trump he disagreed with Scaramucci being appointed communications director.

We wish new incoming Chief of Staff, John F. Kelly, the present secretary of homeland security, the best of luck and caution him not to turn his back on Trump.