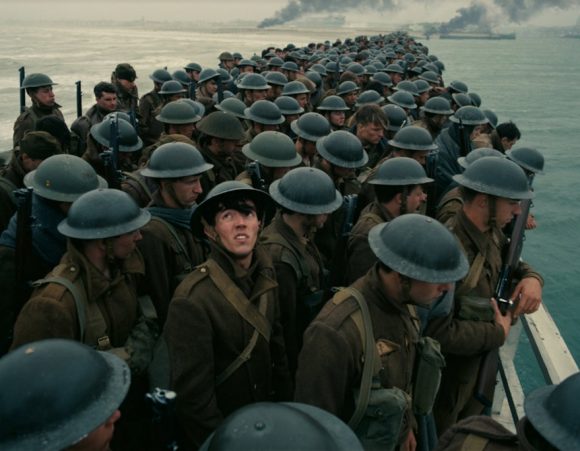 I saw Dunkirk last night and was not disappointed although it surely is a different type of war movie.  Under Christopher Nolan’s direction, this movie emphasizes the fears and experiences of the common soldiers not on the generals or strategists. While well-known in the United Kingdom, the story is less well-known here in the States.

In May 1940, Germany advanced into France, trapping Allied troops on the beaches of Dunkirk on the French coast. Under air and ground cover from British and French forces, troops were slowly and methodically evacuated from the beach using every serviceable naval and civilian vessel that could be found. During the evacuation, thousands of allied soldiers were killed by German planes dropping bombs on British rescue ships and machine-gunning the beaches.  At the end of this heroic mission, 330,000 French, British, Belgian and Dutch soldiers were safely evacuated.  What makes the Dunkirk story so spectacular is that many of the survivors were brought to safety by everyday citizens who used their own boats and vessels (some 1,200 of them) to rescue the soldiers and bring them to Britain.   A New York Times reviewer commented:

“One of the most indelible images in Dunkirk is of a British plane in flames. The movie recounts an early, harrowing campaign in World War II that took place months after Germany invaded Poland and weeks after Hitler’s forces started rolling into the Netherlands, Belgium, Luxembourg and France. The plane, having glided to a stop, has been defiantly set ablaze by the pilot to avoid its being captured. It’s an image of unambiguous defeat but also an emblem of resistance and a portent of the ghastly conflagrations still to come…

…Mr. Nolan’s unyielding emphasis on the soldiers — and on war as it is experienced rather than on how it is strategized — blurs history even as it brings the present and its wars startlingly into view.  Dunkirk is a tour de force of cinematic craft and technique, but one that is unambiguously in the service of a sober, sincere, profoundly moral story that closes the distance between yesterday’s fights and today’s. Mr. Nolan closes that distance cinematically with visual sweep and emotional intimacy, with images of warfare and huddled, frightened survivors that together with Hans Zimmer’s score reverberate through your body. By the time that plane is burning — and a young man is looking searchingly into the future — you are reminded that the fight against fascism continues.”

British troops would not return to France until four years later on D-Day on June 6, 1944.

Give it a try!