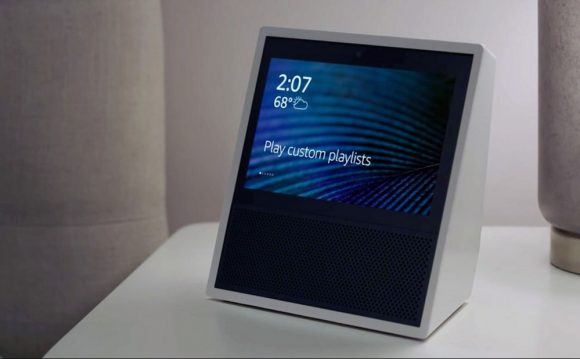 The major tech companies such as Apple, Amazon, and Google, have been at war in trying to develop a new information appliance that would do a couple of things well and everyone would want in their homes.  Amazon just took another step in this direction with the announcement of the Echo Show.   While not fully there, you can see Amazon’s vision for the future of computing based on an Echo Show that will perform specific operations similar to other household appliances such as a toaster or blender.  Here is a review courtesy of  the New York Times:

“…the  information appliance is here, sitting on my kitchen counter.

It’s called the Echo Show, and it is the latest incarnation of the Echo, Amazon’s voice-controlled smart speaker that has become a surprise hit. The Echo Show is easy to describe; it’s an Echo with a screen, and you control it the same way you do any other Echo — by talking to Alexa, its cheery assistant. As my colleague Brian X. Chen wrote in his review, the Show is far from perfect; it has some bugs and you get the feeling that Amazon is still searching for a killer purpose for it.

But these are quibbles. The Echo Show is a remarkable machine, not just for what it is now but for the way it clarifies Amazon’s vision of the future of computing. It’s becoming the model for a new kind of communal, household computer…

One measure of the power of this vision is how quickly Amazon’s rivals are racing to copy it; both Apple and Google have their own takes on the Echo.

It’s questionable how far these rivals will get. Amazon’s business model, which depends on millions of households buying millions of goods, is uniquely suited to selling Echos at low prices, because Amazon is certain it can make money on the device from extra Amazon purchases. (The lowest-priced Echo, the Dot, sells for $50; the new Show, available to the public starting Wednesday, sells for $230, but you get $100 off if you buy two.)

What’s more, Amazon is far ahead. The Echo is much more useful than Google Home, which was released two years after Amazon’s device, and the Apple HomePod speaker will not ship until the end of the year. Given that lead, the Echo is beginning to look unstoppable. It is well on the way to becoming the operating system for suburbia.

I suspect you’re scoffing. The primary knock is that [the Echo Show] does not do a whole lot. This is also the main criticism of the Echo and, now, the Echo Show. These devices can’t do anything you can’t do on your phone, PC or tablet.

That’s true, but it also kind of misses the point. You can make toast in the oven, but you have a toaster because it’s designed to perform a specific task reliably and without any fuss.

That’s the point of the information appliance, too. There’s a whole lot the Echo Show won’t do. It won’t do email. It won’t do the web. It won’t play first-person shooters. It is emphatically, purposely not a general-purpose computer. But what it does do — play music and videos, make video calls, tell you the news, tell you the time and weather, and shop at Amazon — it does with such surpassing ease that it feels like a magic trick.

There are a few reasons for that. One is the Show’s unusual and quietly innovative interface.

Dave Limp, Amazon’s senior vice president for devices, told me that when the company was first designing the Show, it tried to use the same interface that it used for its tablet computers. But the team soon realized this didn’t work. For one thing, the Echo Show is designed to be used just with your voice — the screen adds extra information, but you have to look at it only when you specifically ask for visual information (such as when you want a video). A standard mobile operating system, which is heavily visual, just wouldn’t work.

Another reason a tablet interface wouldn’t have worked is that it felt too much like a computer, and one overriding design goal of the Echo and the Echo Show was to hide any relationship to anything computerlike.

The Show’s operating system, memory, storage and other specifications are completely hidden from users. The Echo does have a version of apps, known as “skills,” but they aren’t anything like smartphone apps. You install them just by asking Alexa to enable them, and when you want to use one, you just name it. To watch a video, you just ask for the video — you don’t load up a web browser or the YouTube app and then search for it.

“It’s a very different mental model than the traditional computer, smartphone or tablet, where you have to think of which app you want to use and then open it and then dive in,” Mr. Limp wrote in an email.

The Echo Show has one other advantage over smartphones and tablets: It’s always there in the same spot.

Your phone and tablet move around the house. Often they are nearby, but sometimes they aren’t. That uncertainty makes them less useful for the kind of ambient computing tasks the Echo is good at. When you are in the kitchen and need to look up a recipe, you could find your iPad to call it up. But the Echo Show is always there, so you and everyone else at home come to rely on it — you know that when you call out for it, it will always answer.

Such communal, stationary devices are not unusual in our homes. All the appliances are stationary and communal, from the fridge to the washing machine. We also have some appliances whose sole purpose is to provide us with information and entertainment — bedside clocks and TVs, for instance. Mr. Limp said these informational appliances provided a “mental model” for the Show’s design, which got me thinking about the expansiveness of Amazon’s ambitions here.

The Show has a seven-inch screen. There’s no reason the screen could not be slightly bigger — an iPad-size one that clings to your bathroom mirror, for instance. Or it could be much, much bigger.

In fact, let me go out on a limb: Within a couple of years, I bet Amazon will make its own TV that will work just like the Echo Show. Because if you are trying to create the perfect home appliance, there is no better target than the biggest screen in the house.”

Jeff Bezos and Amazon again “show” that they are the ones to watch to glimpse technology’s future.