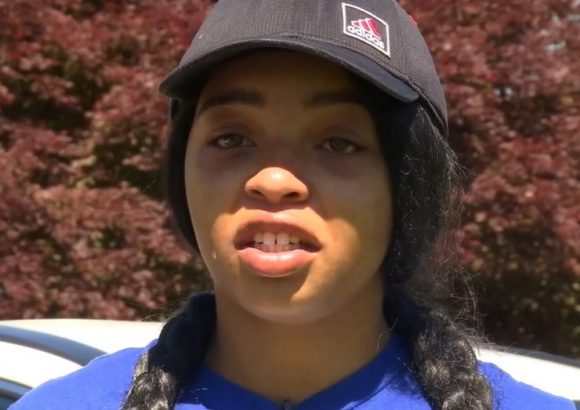 Destinee Mangum, one of the girls at the center of the stabbing attack in Portland, Oregon, has shared a message of thanks  to the men who died trying to stop the man who was harassing her.  As reported in The Huffington Post and other media:

“Mangum, 16, was riding a MAX train Friday with a 17-year-old-friend who is Muslim and was wearing a hijab, according to The Oregonian, when a man later identified as Jeremy Joseph Christian, 35, allegedly began verbally abusing the two girls.

In tears, Mangum told Fox affiliate KPTV this weekend that she wanted “to say thank you to the people who put their life on the line for me, because they didn’t even know me.”

“They lost their lives because of me and my friend and the way we looked,” Mangum continued. “I just want to say thank you to them and their family, and I appreciate them, because without them we probably would be dead right now.”

Best and Namkai-Meche have received a wave of tributes from friends, family and strangers describing them as heroes for their selfless action.

“They were attacked because they did the right thing,” said Portland Mayor Ted Wheeler. “Their actions were brave and selfless and should serve as an example and inspiration to us all.”

Christian is known to authorities as a white supremacist and has previously been convicted of several felonies, according to the Portland Mercury. Before the attack, he was “ranting and raving,” Portland police spokesman Pete Simpson said.

A witness told KATU-TV that Christian had said to the girls, “Get off the bus, and get out of the country because you don’t pay taxes here.”

Mangum shared a similar account with KPTV, saying the man had told them to get out of the country and to “go back to Saudi Arabia.”

“He was just telling us that we basically weren’t anything and that we should kill ourselves,” she said.

She and her friend had decided to move to a different part of the train because they were scared and then strangers jumped in to stand up to their harasser, Mangum told the news station.

Christian was booked into a local jail Saturday and has been charged with offenses including two counts of aggravated murder, one of attempted murder and two counts of intimidation in the second degree.

The attack occurred shortly before the beginning of the Islamic holy month of Ramadan and has drawn condemnation as the latest example of anti-Muslim hate in a political climate where Islamophobia is on the rise.”