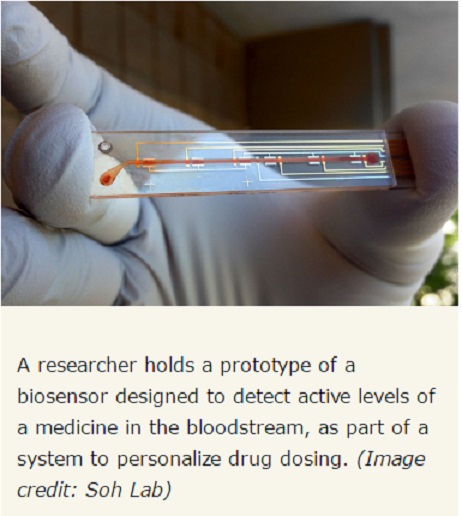 A team of engineers, led by H. Tom Soh and Peter Mage at Stanford University, have  developed a biosensor-based monitoring tool to insure that people receive proper dosages of prescribed drugs.  In a paper published in Nature Biomedical Engineering, the group showed that the technology could continuously regulate the level of a chemotherapy drug in living animals.  As reported by the Stanford News Service:

“This is the first time anyone has been able to continuously control the drug levels in the body in real time,” Soh said. “This is a novel concept with big implications because we believe we can adapt our technology to control the levels of a wide range of drugs.”

The new technology has three basic components: a real-time biosensor to continuously monitor drug levels in the bloodstream, a control system to calculate the right dose and a programmable pump that delivers just enough medicine to maintain a desired dose.

The sensor contains molecules called aptamers that are specially designed to bind a drug of interest. (These aptamers are a focus of Soh’s lab.) When the drug is present in the bloodstream, the aptamer changes shape, which an electric sensor detects. The more drug, the more aptamers change shape.

That information, captured every few seconds, is routed through software that controls the pump to deliver additional drugs as needed. Researchers call this a closed-loop system, one that monitors and adjusts continuously.

The group tested the technology by administering the chemotherapy drug doxorubicin in animals. Despite physiological and metabolic differences among individual animals, they were able to keep a constant dosage among all the animals in the study group, something not possible with current drug delivery methods. The researchers also tested for acute drug-drug interactions, deliberately introducing a second drug that is known to cause wide swings in chemotherapy drug levels. Again they found that their system could stabilize drug levels to moderate what might otherwise be a dangerous spike or dip.

If the technology works as well in people as in their animal studies, it could have big implications, Soh said. “For example, what if we could detect and control the levels not only of glucose but also of insulin and glucagon that regulate glucose levels?” he said. That could allow researchers to create an electronic system to replicate the function of the dysfunctional pancreas for patients with type 1 diabetes…

…The team plans to miniaturize the system so that it can be implanted or worn by the patient. At present the technology is an external apparatus, like a smart IV drip. The biosensor is a device about the size of a microscope slide.”

Congratulations to Professor Soh and his team.  Their work portends many more breakthroughs that we will see in the coming years in biosensor technology.