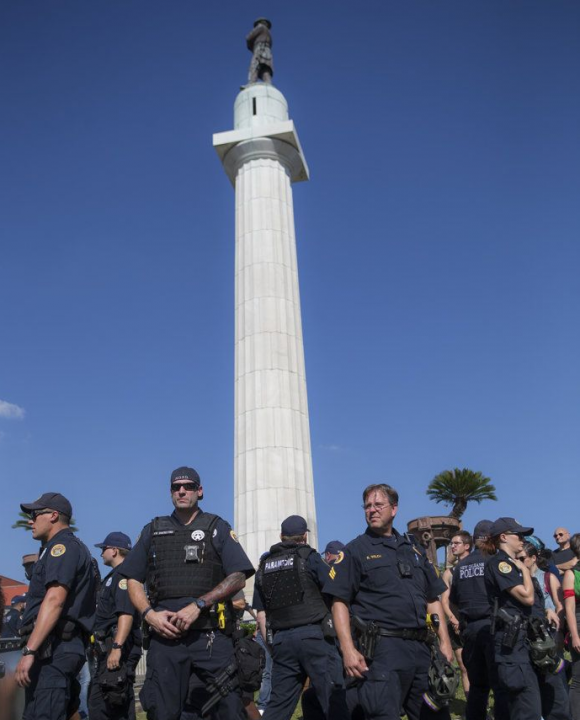 Three Confederate monuments set to come down in New Orleans were still standing yesterday (May 8), a day after demonstrators in support and against the statues’ removal clashed briefly at Lee Circle. It’s unclear when the monuments will be removed.

The statues of Confederate President Jefferson Davis, Gen. Robert E. Lee and Gen. P.G.T. Beauregard remain. The obelisk marking the Battle of Liberty Place was taken down early in the morning April 24.

Mayor Mitch Landrieu said the three remaining monuments wouldn’t be removed during Jazz Fest, but now that the festival is over, it’s unclear how quickly the city will act. Officials haven’t released any timelines, citing concerns about the safety of workers and officers involved.

The New York Times editorial (below) this morning justly addresses the issue.

The Confederate-flag-waving white supremacist who murdered nine African-Americans in a Charleston, S.C., church two years ago made it impossible to evade the fact that the banner — and Confederate ideology generally — had been a rallying point for white supremacy and racial terrorism for more than 100 years.

That tragedy brought fresh urgency to a reappraisal of public monuments that was underway in many Southern communities, including New Orleans, whose mayor announced within days of the massacre that he planned to relocate four Confederate memorials that were built to celebrate a time when black citizens were not fully human in the eyes of the state.

The city plans to place the memorials in storage until an appropriate setting can be found, perhaps a museum that could put them in historical context. But the unfolding backlash — including threats against crane operators and demonstrations — shows the extent to which many citizens are hesitant to part with even the most abhorrent artifacts of history and how little many of them know about when and why these memorials were built.

The first memorial was relocated last month by workers who wore masks and bulletproof vests because they feared for their lives. It is called the Battle of Liberty Place Monument and was erected in 1891 to commemorate the uprising of the Crescent City White League, white supremacists who opposed Reconstruction and the integrated police force that resulted. Decades later, in 1932, a plaque was added expressly articulating its white supremacist origins.

The memorials that are slated to be relocated belong to the cult of the lost cause and were built to valorize a treasonous war that was fought to preserve slavery — and to essentially deify generals like Robert E. Lee who fought it.

Some who claim attachment to these monuments, which dominate the city’s most prominent public spaces, are white supremacists themselves. Others need to understand that the monuments were typically built during the late 19th and early 20th centuries, when the Southern states were unleashing a reign of racial terror on black communities while simultaneously writing them out of their constitutions.

Citizens of color have always understood this and chafed at the sight of the monuments on their streets. As one African-American told The New York Times recently, “They’re putting that image right in our face and saying, ‘Blacks at the bottom, whites at the top.’”

Critics have accused Mayor Mitch Landrieu of trying to rewrite history. But as he noted when he addressed the New Orleans Council on this matter two years ago, many people, including African-Americans, who were voiceless when the city stocked its plazas and thoroughfares with monuments to white supremacy have voices now and deserve to be heard on this matter.

As for the city’s future, he asked, “How can we expect to inspire a nation when our most prominent public spaces are dedicated to the reverence of the fight for bondage and supremacy?”