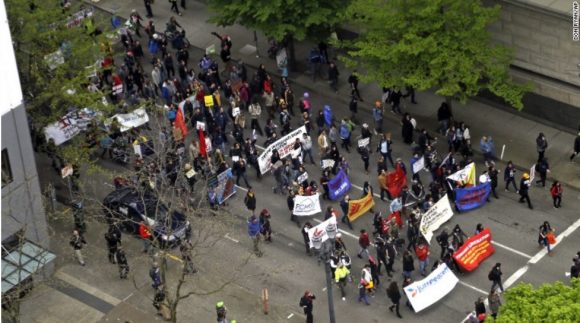 In honor of May Day yesterday, protesters marched in major cities, towns and smaller communities for workers, for immigrants, for women and for others. Normally May Day is reserved for organized labor but this year it has morphed into a broader theme.  Here is a brief recap of some of the protests and parades around the country courtesy of the New York Times.

“Many surrendered a shift’s pay. Labor and immigrants’ rights activists, criticizing Mr. Trump’s detention and deportation agenda, had called for a general strike on May 1, also known as May Day, to emphasize the overlap between the concerns of unauthorized immigrants — on whom farms, restaurants, construction projects and other industries depend — and those of workers.

“Trump has pitted the U.S. working class against migrant workers and refugees, and so we must strive to create bridges, not bans or walls, to connect our struggles together,” representatives of the International Migrants Alliance wrote in its call to assemble.

One of the marches, in Portland, Ore., was ended by the police after some protesters threw rocks, lead balls, smoke bombs and full cans of Pepsi at officers. The police blamed anarchist groups — which have disrupted other protests since the election — for destroying a police car, attacking officers, damaging windows and starting fires. More than two dozen people were arrested.

In Grand Rapids, Mich., more than 4,000 people — twice the number of people who sat out jobs and school days in Grand Rapids on February’s nationwide “Day Without Immigrants” — had turned out in the rain by midafternoon, closing large sections of the city’s Latino community. Bakeries, markets, restaurants and clothing stores had shuttered for the day out of solidarity or for lack of workers.

In Homestead, Fla., where immigrant farmworkers keep fields of zucchini, beans, cherry tomatoes and okra growing, over 1,000 people marched from a park to City Hall. Many were not sure how employers would react when they returned to work on Tuesday. Local activists had planned to accompany farmworkers back to their jobs to offer support.

About 300 people gathered outside a Home Depot near Minneapolis to protest what they said were the anti-labor practices of some janitorial companies that clean stores for Home Depot, Sears and other retailers.

“We have no benefits. No vacation. We don’t have anything,” said Antonia Sanchez, a Mexican immigrant who has worked for one such contractor for nine years, cleaning a Sears. “It doesn’t matter if we are black, white or brown. What matters is that we stay united and fight for what we deserve.”

In Austin, Tex., some immigrants’ rights advocates staged a sit-in at the office of Gov. Greg Abbott, a Republican, over legislation that would punish local officials and cities for refusing to help the federal government with deportations. Outside the Immigration and Customs Enforcement office in San Francisco, protesters blocked an intersection and a driveway.

In New York, protesters in Union Square and Washington Square Park waved signs with slogans in Spanish, like “Workers united will never be defeated.” There were more than 30 arrests, mostly for disorderly conduct.  Marchers moved to Foley Square in Lower Manhattan, where Mayor Bill de Blasio shouted to the crowd, just as a double-decker tour bus rolled up, “Everything Donald Trump wants to do, I have a simple message: No, you can’t! No se puede!”

In Los Angeles, tens of thousands of people holding signs declaring “No human is illegal” and “Sanctuary now!” marched about two miles from MacArthur Park to City Hall downtown.

Unfortunately there were also some incidents of violence but all in all a May Day of peaceful protests.