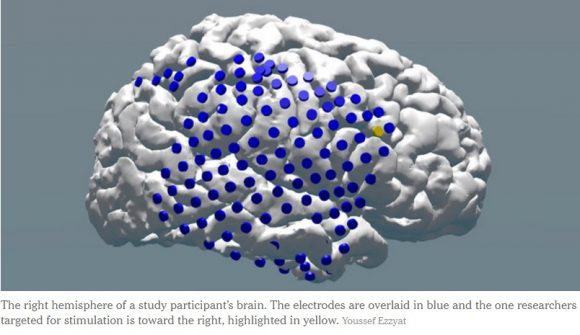 A team of scientists from multiple universities and clinics have been collaborating on new technology to develop a sort of “pacemaker” for the brain.  The technique — called direct neural recording – is based on the clinical placement of electrodes and is fast becoming  the leading edge of research into the biology of human memory.  Here is an excerpt from a New York Times article describing the latest development  in using this technology

“Well-timed pulses from electrodes implanted in the brain can enhance memory in some people, scientists reported on Thursday, in the most rigorous demonstration to date of how a pacemaker-like approach might help reduce symptoms of dementia, head injuries and other conditions.

The report is the result of decades of work decoding brain signals, helped along in recent years by large Department of Defense grants intended to develop novel treatments for people with traumatic brain injuries, a signature wound of the Iraq and Afghanistan wars. The research, led by a team at the University of Pennsylvania, is published in the journal Current Biology.

Previous attempts to stimulate human memory with implanted electrodes had produced mixed results: Some experiments seemed to sharpen memory, but others muddled it. The new paper resolves this confusion by demonstrating that the timing of the stimulation is crucial.

Zapping memory areas when they are functioning poorly improves the brain’s encoding of new information. But doing so when those areas are operating well — as they do for stretches of the day in most everyone, including those with deficits — impairs the process.

“We all have good days and bad days, times when we’re foggy, or when we’re sharp,” said Michael Kahana, who with Youssef Ezzyat led the research team. “We found that jostling the system when it’s in a low-functioning state can jump it to a high-functioning one.”

Researchers cautioned that implantation is a delicate procedure and that the reported improvements may not apply broadly. The study was of epilepsy patients; scientists still have much work to do to determine whether this approach has the same potential in people with other conditions, and if so how best to apply it. But in establishing the importance of timing, the field seems to have turned a corner, experts said.

Experts said the new report gives scientists a needed blueprint for so-called closed-loop cognitive stimulation: implanted electrodes that both monitor the functional state of memory areas, moment to moment, and deliver pulses only in the very microseconds when they’re helpful. The hope is that such sensitive, timed implants could bolster thinking and memory in a range of conditions, including Alzheimer’s and other dementias, as well as deficits from brain injury.”

This is indeed an important breakthrough and a glimpse into the future of man-machine interfaces that overcome diseases and injuries to the brain and other human organs.