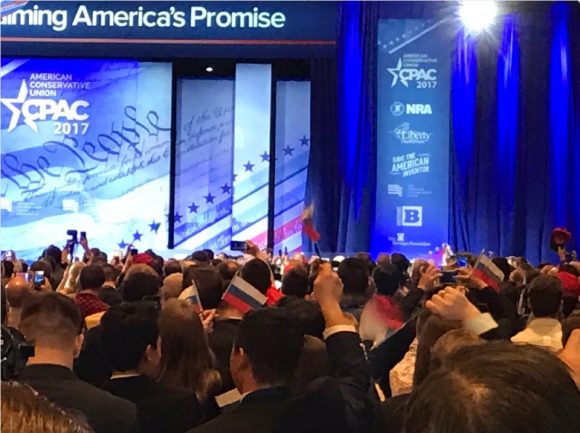 Political pranksters passed out small Russian flags emblazoned with President Trump’s name at yesterday’s Conservative Political Action Conference — where Trump supporters unwittingly waved the banners (see video below) during his Friday keynote speech.   As reported by the New York Post and other media:

“The pranksters passed out 1,000 red-white-and-blue Russian flags before Donald Trump’s speech at the conservative confab in Maryland on Friday. Audience members scooped them up and waved them enthusiastically as Trump railed against the media. He also tweeted a series of attacks earlier against the FBI, accusing it of leaking information that the White House had pressured the bureau to publicly dispute reports of contact between Trump’s aides and Russia.

The flag tricksters identified themselves as Jason Charter and Ryan Clayton with the self-described “resistance” group Americans Take Action. They purchased tickets to the conference shortly before Trump was to take the podium and handed out the flags, Charter told The Huffington Post.

Charter, 22, said that the gag was intended to mock Trump’s admiration of Russian President Vladimir Putin and highlight concerns about Trump administration ties to Russia. “Donald Trump is selling out the U.S.,” he said.

The prank went surprisingly smoothly, he added. “I asked people if they wanted a Trump flag and they took it,” Charter said. “There were only about five people who said, ‘Wait a minute, this is the Russian flag.’”

Politico’s Tim Alberta tweeted that the crowd “gave no thought” to the Russian flag. They just saw “red, white & blue” with Trump printed on it.

Clayton, 36, using a mock Russian accent in an interview with Atlantic, called the prank a “true-flag” operation. “It show how Trump and Russia are so connected, they like peas in pod,” he said.

CPAC organizers finally got a clue and quickly collected the flags, and warned that anyone who continued to wave or hold one would be ejected,

Trump has come under fire since the campaign for his strangely laudatory statements about Putin and for appearing to call on the Russian government to hack into campaign rival Hillary Clinton’s emails. Michael Flynn stepped down as Trump’s national security adviser earlier this month after it was revealed that he discussed easing sanctions against the country with Russia’s ambassador before Trump was sworn in as president. Trump has also expressed skepticism about intelligence officials’ findings that Russia was responsible for hacking Democrats’ emails and spreading fake news harmful to Clinton in a bid to sway the election toward Trump.”

I cannot wait to hear the Russian national anthem played at the next Trump rally.