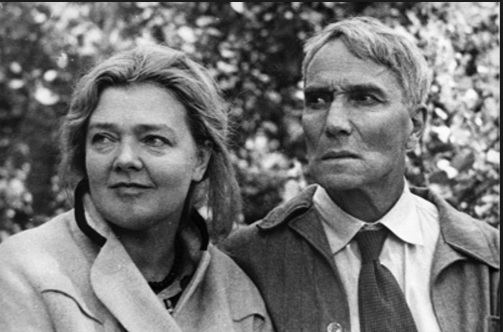 For those of you who have enjoyed Doctor Zhivago but do not know the story behind it, Boris Pasternak’s grandniece, Anna Pasternack, provides a new analysis of the love affair that sparked the book.  Lara:  The Untold Love Story and the Inspiration for Doctor Zhivago (Ecco/Harper Colline, 2017), draws on previously neglected family sources and original interviews, and explores the passionate relationship of her great-uncle and his lover, Olga Ivinksaya. I found it a most interesting treatment of the topic with rich detail of Boris’s life, and lots of suffering, drama, loyality, and loss.  I read Doctor Zhivago decades ago and have seen the movie many times but I have never read anything about the details of Pasternak’s actual life.  The book makes the point that Olga suffered horribly on his behalf and in return, Pasternack channeled his passion for Olga into Doctor Zhivago.

“Thirty-four-year-old Olga Ivinskaya had been widowed twice and had two children when, in 1946, she met Pasternak, 22 years her senior. Pasternak began courting her immediately. At the time, he was unhappily married to his second wife, Zinaida, whose favorite activities included chain-smoking and playing cards, and who had attracted him with her exceptional housekeeping skills. Pasternak prized domestic routine, a necessary precondition for the exercise of his genius. Olga had worshiped Pasternak’s writing since she was a teenager, and she leapt at the chance to become his lover and artistic amanuensis.

Until his death nearly 14 years later, Zinaida would be unsympathetic to Pasternak’s feeble efforts to divorce her and marry Olga. Zinaida had many incentives to stay married to Pasternak; despite his unwillingness to submit to Soviet requirements, his international fame brought substantial economic and social benefits. Olga, on the other hand, became a victim of her lover’s prestige. In 1949, unable to arrest Pasternak for his private readings of drafts of the anti-Soviet Doctor Zhivago, the secret police arrested Olga instead. She spent several years in a labor camp but returned as devoted as ever, helping Pasternak finish Doctor Zhivago  and then attempting to have it published.

When Pasternak gave the manuscript to a young Italian visitor in 1956, he condemned not only himself but also Olga and her family. Soviet authorities were enraged by the international sensation that Doctor Zhivago  caused, and by the subsequent announcement that Pasternak had won the Nobel Prize. Pasternak was ostracized and harassed. In despair, he proposed a suicide pact with Olga; she talked him out of it. Pasternak was placed under heavy pressure to emigrate. He could have taken Olga and her family with him, but he felt unable to endure such a dramatic break with his old life. Finally, he refused the Nobel Prize. As he lay dying of lung cancer in 1960, Olga was not allowed to see or speak to him. A few months later Olga was arrested again, along with her daughter. Authorities wanted to cleanse the great writer’s reputation by blaming a sinful “adventuress” for the politically embarrassing Doctor Zhivago.”

The second half of the book is filled with raw emotion and detailed descriptions of Olga’s life in a gulag ( she has a miscarriage while interned),  the harassment of the secret police, Pasternak’s death and funeral, and the subsequent imprisonment of Olga and her daughter, Irina.

Doctor Zhivago while widely popular outside of the Soviet Union, was not published there until 1988.  In 1997, I was one of several faculty doing a two-week seminar in Salzburg, Austria, for members of ministries of education staff  from around the world involved with revising college curricula to use technology to teach English as a second language.  There was one attendee who was a professor and who had taught at several universities in the Ukraine.  One evening, we were discussing our work in our home countries, and I mentioned Pasternak’s Doctor Zhivago.  She had never heard of the book.  A couple of months later, she sent me an email thanking me, an American, for introducing her to it.