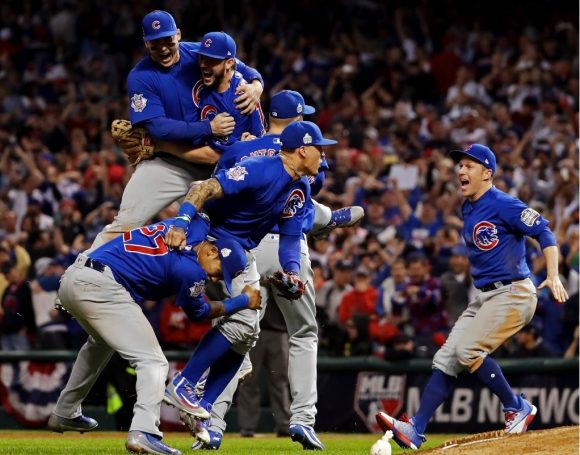 In a baseball game for the ages last night, the Chicago Cubs defeated the Cleveland Indians 8-7 in ten innings and shattered their 108-year championship drought in epic fashion.   There were home-runs at critical moments, closers coming in to pitch in the fifth inning, a rain delay, and extra innings.  Here is a brief recap:

If you are going to endure years — no, generations — of futility and heartbreak, when you do finally win a World Series championship, it may as well be a memorable one.

When the Indians rallied with three runs in the eighth inning — including a two-out, two-strike, two-run thunderbolt of a home run by Rajai Davis off closer Aroldis Chapman — the Cubs found a way to beat back the ghosts of playoffs past.

After a brief rain delay following the ninth inning, they pushed two runs across in the 10th inning on a double by Ben Zobrist, the Series’s most valuable player, and a single by Miguel Montero.

The Cubs then had to hold their breath in the bottom of the inning when Davis hit a run-scoring single to pull the Indians to a run behind. But reliever Mike Montgomery replaced Carl Edwards and got Michael Martinez to hit a slow roller into the infield. Third baseman Kris Bryant scooped it up and threw across to first baseman Anthony Rizzo.

As the ball made its flight across the diamond, the stadium went silent for one of only a few times all night — and only until it settled into Rizzo’s glove. Then the huge contingent of Cubs fans erupted, and the players raced to the middle of the infield to celebrate.”

Congratulations Chicago – The Curse is over!