The news media went on a frenzy yesterday when FBI Director James Comey  announced that his agency was reviewing new emails to determine whether they are connected to Democratic presidential nominee Hillary Clinton’s handling of sensitive government information.  The New York Times first reported and The Associated Press confirmed that the emails were found on devices belonging to Clinton aide Huma Abedin and former Congressman Anthony Weiner, Weiner has been under federal investigation over allegations that he traded sexually explicit messages with an underage girl. He and Abedin separated in August.

In a Friday letter (see text below)  to members of Congress, FBI Director James Comey said the agency, “in connection to an unrelated case” had learned of email that “appear to be pertinent to the investigation.” Comey said the FBI “cannot yet assess” whether the material “may be significant” and that he “cannot predict how long it will take us to complete this additional work.”

White House spokesman Eric Schultz said the president learned of Comey’s announcement from press reports and the “president’s expectation is that all FBI efforts follow the facts wherever they lead.”

Sen. Dianne Feinstein (D-Calif.) released a scathing statement attacking Comey for sending a letter with so many implications and yet so many unanswered questions less than two weeks before Nov. 8.

“Director Comey’s announcement played right into the political campaign of Donald Trump, who is already using the letter for political purposes. … The FBI has a history of extreme caution near Election Day so as not to influence the results. Today’s break from that tradition is appalling,” she wrote.

Brookings senior fellow Benjamin Wittes wrote a breakdown on Twitter of what Comey’s letter means and a post on Lawfare urging the press not to read too much into the FBI’s review.

This looks again like a lot of smoke but one has to wonder about the intentions of FBI Director Comey sending this letter so close to Election Day. 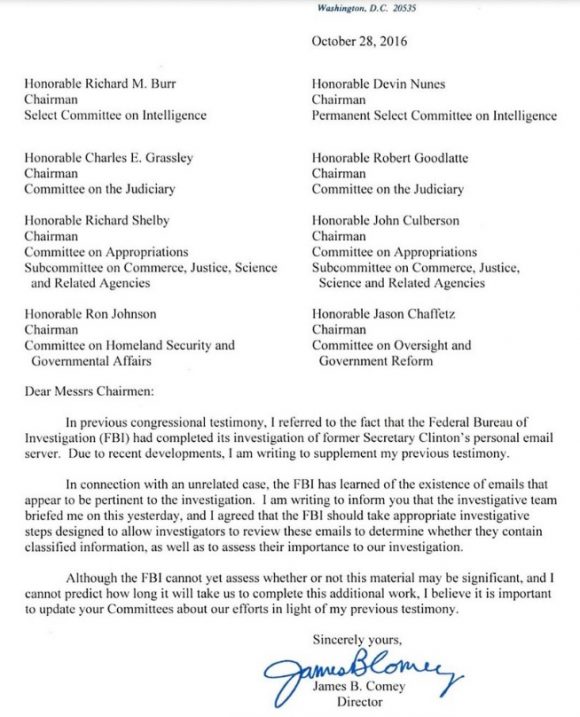