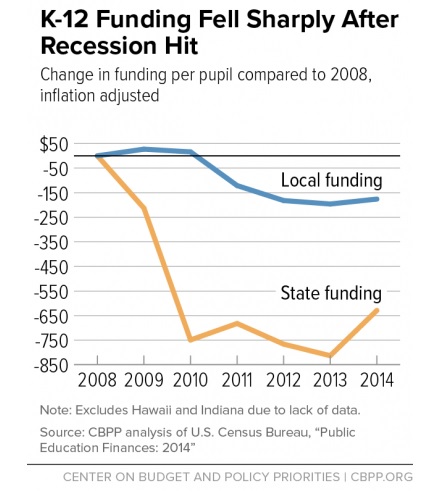 The Center on Budget and Policy Priorities, a nonpartisan research and policy institute, has just published a study indicating that state funding of K-12 education has declined significantly over the past decade.  Here is an excerpt:

“Our survey, the most up-to-date data available on state and local funding for schools, also indicates that, after adjusting for inflation:

Our country’s future depends heavily on the quality of its schools.  Increasing financial support can help K-12 schools implement proven reforms such as hiring and retaining excellent teachers, reducing class sizes, and expanding the availability of high-quality early education.  So it’s problematic that so many states have headed in the opposite direction over the last decade.  These cuts risk undermining schools’ capacity to develop the intelligence and creativity of the next generation of workers and entrepreneurs.