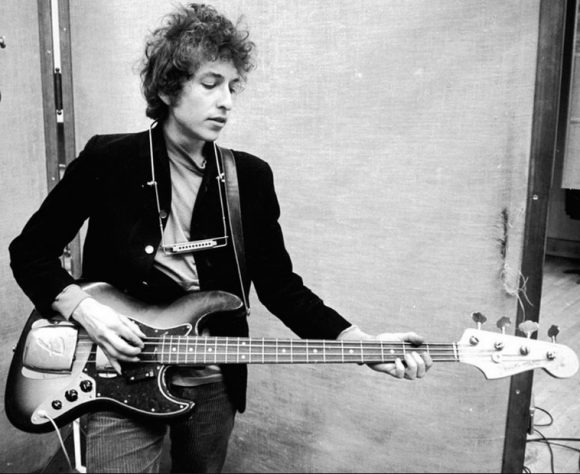 It was announced yesterday that Bob Dylan won the Nobel Prize for Literature.  He is the only singer-song writer to win the award.  Dylan was the voice of (our) 1960s generation.  At rallies and other events, we just waited for someone to play one of Dylan’s songs such as “Blowin’ in the Wind,” “The Times They Are a-Changin’,” and “Like a Rolling Stone” that captured the moment. Here is an excerpt from a New York Times article on the award:

“Half a century ago, Bob Dylan shocked the music world by plugging in an electric guitar and alienating folk purists. For decades he continued to confound expectations, selling millions of records with dense, enigmatic songwriting.

Now, Mr. Dylan, the poet laureate of the rock era, has been rewarded with the Nobel Prize in Literature, an honor that elevates him into the company of T. S. Eliot, Gabriel García Márquez, Toni Morrison and Samuel Beckett.

Mr. Dylan, 75, is the first musician to win the award, and his selection on Thursday is perhaps the most radical choice in a history stretching back to 1901. In choosing a popular musician for the literary world’s highest honor, the Swedish Academy, which awards the prize, dramatically redefined the boundaries of literature, setting off a debate about whether song lyrics have the same artistic value as poetry or novels.

But others called the academy’s decision misguided and questioned whether songwriting, however brilliant, rises to the level of literature.

“Bob Dylan winning a Nobel in Literature is like Mrs Fields being awarded 3 Michelin stars,” the novelist Rabih Alameddine wrote on Twitter. “This is almost as silly as Winston Churchill.”

Many musicians praised the choice with a kind of awe. On Twitter, Rosanne Cash, the songwriter and daughter of Johnny Cash, wrote simply: “Holy mother of god. Bob Dylan wins the Nobel Prize.”

But some commentators bristled. Two youth-oriented websites, Pitchfork and Vice, both ran columns questioning whether Mr. Dylan was an appropriate choice for the Nobel.

As the writer of classics of folk and protest songs like “Blowin’ in the Wind” and “The Times They Are a-Changin’,” as well as Top 10 hits including “Like a Rolling Stone,” Mr. Dylan is an unusual Nobel winner. The first American to win the prize since Ms. Morrison in 1993, he is studied by Oxford dons and beloved by presidents.

Yet instead of appearing at the standard staid news conference arranged by a publisher,

Mr. Dylan was in Las Vegas on Thursday for a performance at a theater there. By late afternoon, Mr. Dylan had not commented on the honor.

Mr. Dylan has often sprinkled literary allusions into his music and cited the influence of poetry on his lyrics, and has referenced Arthur Rimbaud, Paul Verlaine and Ezra Pound. He has also published poetry and prose, including his 1971 collection, “Tarantula,” and “Chronicles: Volume One,” a memoir published in 2004. His collected lyrics from 1961-2012 are due out on Nov. 1 from Simon & Schuster.

Literary scholars have long debated whether Mr. Dylan’s lyrics can stand on their own as poetry, and an astonishing volume of academic work has been devoted to parsing his music. The Oxford Book of American Poetry included his song “Desolation Row,” in its 2006 edition, and Cambridge University Press released “The Cambridge Companion to Bob Dylan” in 2009, further cementing his reputation as a brilliant literary stylist.

Billy Collins, the former United States poet laureate, argued that Mr. Dylan deserved to be recognized not merely as a songwriter, but as a poet.

“Most song lyrics don’t really hold up without the music, and they aren’t supposed to,” Mr. Collins said in an interview. “Bob Dylan is in the 2 percent club of songwriters whose lyrics are interesting on the page even without the harmonica and the guitar and his very distinctive voice. I think he does qualify as poetry.”

In giving the literature prize to Mr. Dylan, the academy may also be recognizing that the gap has closed between high art and more commercial creative forms.

“It’s literature, but it’s music, it’s performance, it’s art, it’s also highly commercial,” said David Hajdu, a music critic for The Nation who has written extensively about Mr. Dylan and his contemporaries. “The old categories of high and low art, they’ve been collapsing for a long time, but this is it being made official.”

In previous years, writers and publishers have grumbled that the prize often goes to obscure writers with clear political messages over more popular figures. But in choosing someone so well known, and so far outside of established literary traditions, the academy seems to have swung far into the other direction, bestowing prestige on a popular artist who already had plenty of it.

It’s not the first time it has stretched the definition of literature. In 1953, Winston Churchill received the prize, in part as recognition of the literary qualities of his soaring political speeches and “brilliant oratory in defending exalted human values,” according to the academy. And many were surprised last year, when the prize went to the Belarussian journalist Svetlana Alexievich, whose deeply reported narratives draw on oral history.

In its citation, the Swedish Academy credited Mr. Dylan with “having created new poetic expressions within the great American song tradition.”

Sara Danius, a literary scholar and the permanent secretary of the 18-member academy, which called Mr. Dylan “a great poet in the English-speaking tradition” and compared him to Homer and Sappho, whose work was delivered orally. Asked if the decision to award the prize to a musician signaled a broadening in the definition of literature, Ms. Danius responded, “The times they are a-changing, perhaps.”