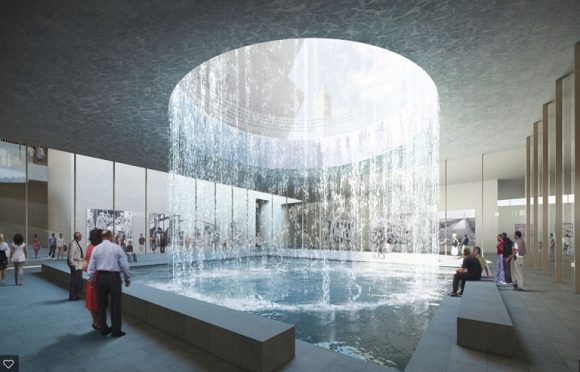 The long-waited opening of the National Museum of African American History and Culture will take place today in Washington, D. C.  Henry Louis Gates Jr., Director of the Hutchins Center at Harvard, has an op-ed piece in today’s New York Times, reflecting on its importance.

“With the ringing of a bell and a speech from President Obama, the National Museum of African American History and Culture in Washington is to officially open its extraordinary collection to the public on Saturday. But the museum can claim another, equally important achievement: helping resolve the protracted debate about the contributions of black people to American history and, indeed, about whether they had a history worth preserving at all. Those questions were at the heart of the nation’s original debate about whether, and how, black lives matter.

For years, the issue was whether black people were fit to be more than slaves. “Never yet could I find that a black had uttered a thought above the level of plain narration; never see even an elementary trait of painting or sculpture,” Thomas Jefferson wrote. “I advance it, therefore, as a suspicion only, that the blacks, whether originally a distinct race, or made distinct by time and circumstances, are inferior to the whites in the endowments both of body and mind.”

The connection between humanity and history was central to this debate, and in the estimation of some Enlightenment thinkers, blacks were without history and thus lacked humanity. The German philosopher Hegel argued that human beings are “human” in part because they have memory. History is written or collective memory. Written history is reliable, repeatable memory, and confers value. Without such texts, civilization cannot exist. “At this point we leave Africa,” he pontificated, “not to mention it again. For it is no historical part of the world; it has no movement or development to exhibit.”

Black people, of course, would fight back against these aspersions by writing histories about the African-American experience. In the 1880s, George Washington Williams, whom the historian John Hope Franklin called “the first serious historian of his race,” published the “History of the Negro Race in America from 1619 to 1880”; he confessed that part of his motivation was “to call the attention to the absurd charge that the Negro does not belong to the human family.”

About a decade later, W.E.B. Du Bois became the first black person to earn a Ph.D. (in history) at Harvard, followed by Carter G. Woodson, a founder of Negro History Week, who wanted to make history by writing it. “If a race has no history,” he wrote, “it stands in danger of being exterminated.” Arthur A. Schomburg, the famous bibliophile, posited a solution: “The American Negro must remake his past in order to make his future.” History “must restore what slavery took away.”

This mandate to rewrite the status of the race by writing the history of its achievements was too broad to be contained only in books. Public history mattered, too. In 1915, Woodson and several of his friends established the Association for the Study of Negro Life and History, in part to popularize the study of black history. That same year, black leaders called for a memorial to honor black veterans. And a year later — exactly a century ago — Representative Leonidas C. Dyer, a Missouri Republican, introduced legislation to create a monument in their honor. After decades of resistance, that effort took a giant leap forward in 2003, when Congress passed bipartisan legislation to build the museum that was signed by President George W. Bush.

Some $540 million later, the first black president will open the museum’s doors, admirably directed by another historian, Lonnie G. Bunch III. When he does, the long battle to prove Jefferson, Hegel and so many others wrong will have been won. We can only imagine the triumph that the pioneers of black history would feel had they lived to see this occasion.

More than a museum, the building on the National Mall is a refutation of two and a half centuries of the misuse of history to reinforce a social order in which black people were enslaved, then systematically repressed and denied their rights when freed. It also repudiates the long and dismal tradition of objectifying black people in museums.”

“History,” James Baldwin wrote, “is not merely something to be read. And it does not refer merely, or even principally, to the past. On the contrary, the great force of history comes from the fact that we carry it within us, are unconsciously controlled by it in many ways, and history is literally present in all that we do.”