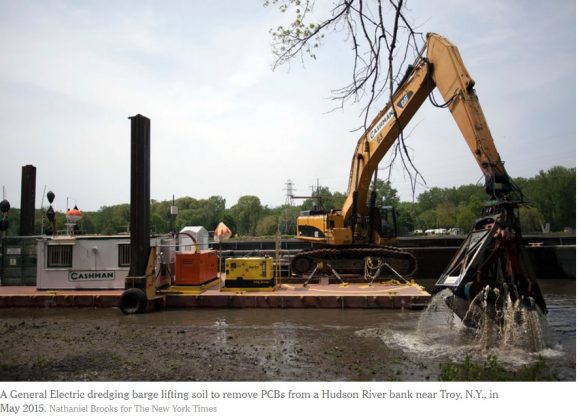 The Hudson River is one America’s remarkable waterways that was contaminated for decades by factories along its shores.  G.E. especially was a major polluter and legally fought any attempts by state and local governments to assume any responsibility for the damage done.  In 2005, G.E. agreed to dredge millions of yards of silt containing PCBs and other carcinogens.  The question in 2016 is whether the dredging was enough.  According to the New York State Department of Environmental Conservation, the answers is no.  As reported in the New York Times:

“The federal Environmental Protection Agency has said that the company fulfilled its promises under a 2005 order, resulting in the removal of nearly three million cubic yards of contaminated sediment. But Basil Seggos, the commissioner of the Department of Environmental Conservation, in a recent letter to the E.P.A.’s top official in New York, challenged the federal remedy, saying “unacceptably high levels of PCB-contaminated sediment remain in large portions of the Upper Hudson.”

“The work is not done,” Mr. Seggos said in the letter to Judith Enck, the agency’s regional administrator who oversees New York.

The state believes that at least 136 acres of underwater sediment in the Upper Hudson — stretching north from Albany — harbor “unacceptably high” levels of PCBs, or the synthetic chemical polychlorinated biphenyl, which was used to make transformers, capacitors and other electrical products. The state bolstered its claim by pointing to an analysis by the National Oceanic and Atmospheric Administration showing that the recovery of fish in the Lower Hudson was not as robust as hoped.

The Environmental Protection Agency, responding to the state’s concerns, noted that it disagreed with the findings on fish recovery and questioned NOAA’s methods, which the agency said took place at a single sampling station near Albany shortly after the completion of dredging.

“It is not possible for the fish to recover immediately,” the agency said.

The cleanup of the Upper Hudson paid for by G.E. was prescribed to remove over 2.5 million cubic yards of sediment and encompass a roughly 40-mile stretch of the river, from the Troy Dam to Fort Edward. Its progress is assessed every five years.

But Mr. Seggos, in an interview, said federal officials had allowed G.E. to declare mission accomplished too soon. “Both the amount of sediment and the fish are suggesting that the initial goals of the remedy have not been, and may not be met, for decades,” he said.”

G.E. is admired in corporate circles as one of America’s most profitable companies but along the Hudson it is despised by many for what it did to our waterways.