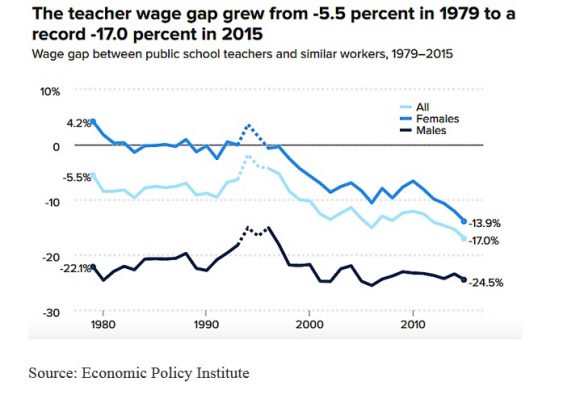 The Economic Policy Institute, a Washington-based nonpartisan think tank, concluded in a report released yesterday that  pay for teachers has stagnated nationally over the past two decades, and fallen behind earnings of other workers with college degrees.  As reported by EdSource:

The report suggests that the pay gap or “penalty,” as the institute calls it, could complicate the efforts by California and other states to solve a teacher shortage and compete for high-achieving college graduates. “If the policy goal is to improve the quality of the entire teaching workforce, then raising the level of teacher compensation, including wages, is critical to recruiting and retaining higher-quality teachers,” the study said.

“It will be a big lift to increase compensation by 11 percent, but it’s important to move in that direction,” Larry Mishel, president of the institute and co-author of the report, said in an interview.

The average teacher in America makes 77 percent of what other workers with a college degree earn, based on 2011-15 data in the report; the closest state to parity is Wyoming, where the gap is only 1.5 percent. In only five states are teacher weekly wages less than 10 percent behind.

California teachers earned 86 percent of the salaries of other workers with college degrees, the 10th-highest among the states, the report said. Since the late 1990s, the average pay for teachers in California has ranked among the top five states (see EdSource States in Motion), although this advantage has been offset by a high cost of living, particularly in the Bay Area, metropolitan Los Angeles and San Diego.”

The issue also is a serious problem for schools of education that have seen applications drop significantly in some parts of the country over the past five years.  This has definitely been the case here in New York.