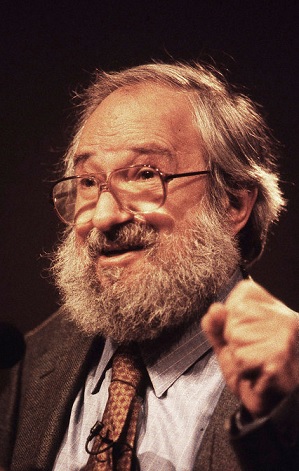 Seymour Papert who was a visionary in the use of computer technology in K-12 education, died at his home in Maine on July 31st.  He foresaw in the 1960s the potential of personal computers as vehicles for teaching, learning, and education creativity.  Anyone who ever saw him speak, would never forget the infectious twinkle in his eyes that won people to his points of view. Below is an excerpt from my book, Online Education Policy and Practice: The Past, Present, and Future of the Digital University, which will be available later this year.

“Seymour Papert was born in Pretoria, South Africa, and completed a doctor of philosophy program in mathematics at the University of Witwatersrand (Johannesburg) and at Cambridge University.  He held several faculty appointments at European universities before accepting a position at MIT in 1963 where he remained for much of his career.  Papert made a number of contributions to the study of artificial intelligence and cognition but is most associated with the development of the Logo programming language used mostly by children.  Working with colleagues, Daniel G. Bobrow, Wally Feurzeig,  and Cynthia Solomon, Logo was developed in 1967.  The original intent of the Logo project was to develop a way to teach artificial intelligence and used LISP, derived from “LISt Processing”, as its developmental programming tool.  However, Papert, influenced by the work of Jean Piaget, converted the project into designing a programming language that could be used by children.  Papert’s philosophy behind the design, was based on experiential and discovery learning which at the time had little if any relationship to computer programming.

Papert, who lived and studied with Jean Piaget, believed that children were able to benefit from computer technology at a very early age. The fundamental Logo concept of manipulating a friendly-turtle icon was directed specifically at the young learner and is derived from Piaget’s theories on cognitive development. Though children develop cognitively at different rates, Piaget proposed that logical thinking, at least as applied to physical reality, begins at approximately 7 to 11 years of age. Logo and its derivatives, such as Microworlds, and many other software programs directed at the young learner have been used successfully in many elementary school programs. While offered as a content area in which children learn about computer technology, Logo is also commonly integrated with other curriculum activities such as mathematics and problem solving. The success of Logo and other software packages designed for young children also suggests that many children of elementary school age are indeed cognitively ready to use and benefit from technology experiences.”

Papert inspired many of us  and was our beacon in the world of education technology. May he rest in peace.