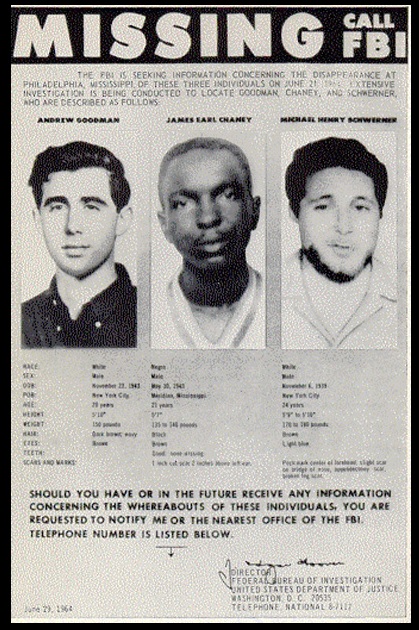 In 1964, three civil rights workers, James Chaney, Andrew Goodman, and Michael Schwerner were murdered near the town of Philadelphia, Mississippi on June 21,  in what was dubbed the “Mississippi Burning” case. The three were investigating the burning of Mt. Zion Methodist Church, which had been the site of a CORE Freedom School.    Andrew Goodman was a student here in New York at Queens College.   Michael Schwerner led a Congress of Racial Equality (CORE) group on the Lower East Side of Manhattan,  James Chaney was a volunteer and organizer in the Congress of Racial Equality (CORE) in Meridian, Mississippi.

After 52 years, the case file of the murders of the three civil rights workers in Mississippi has been officially closed.  That announcement was made at a news conference yesterday by Attorney General Jim Hood.  Edgar Ray Killen was convicted of manslaughter in 2005 for the deaths.

“There are no individuals living now that we can make a case against,” said Hood. “That’s not to say if new information comes forward we won’t investigate.”

In 2014, President Barack Obama posthumously awarded the victims the Presidential Medal of Freedom.

The death of these three individuals was one of the defining moments of the Civil Rights movement of the 1960s.