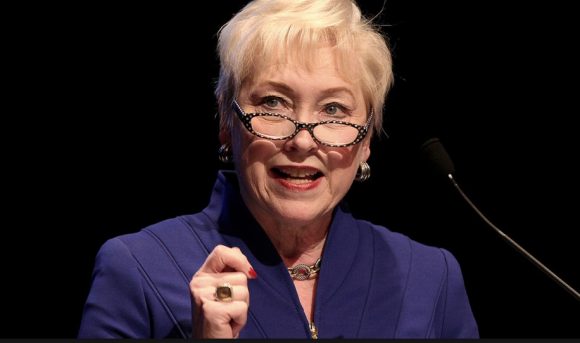 Nancy L. Zimpher, chancellor of the State University of New York, the nation’s largest public university system, announced that she will resign in June 2017.  As reported in The New York Times:

“Nancy L. Zimpher, who has been credited with elevating the State University of New York, the nation’s largest public university system, since becoming chancellor seven years ago, is stepping down next year, the university announced yesterday

Dr. Zimpher has relentlessly promoted the system, through a strategic plan called “The Power of SUNY,” as an engine of economic growth and community development. She has also sought to raise academic standards and has made it easier for students to transfer within SUNY’s sprawling system of 64 campuses, which serves 460,000 full-time and part-time students.

Dr. Zimpher, who will turn 70 in October, is also SUNY’s longest-serving chancellor since the mid-1980s. She said in an interview that she would not be retiring but would continue to be active in various state and national initiatives, including teacher preparation.

“The State University of New York is the greatest, most impactful system of higher education in the country, and being chancellor of SUNY has been the highlight of my career,” Dr. Zimpher said.

She has steered the university during a fraught time for public higher education. Since the 2008 recession, states have slashed per-student spending at public colleges and universities by 17 percent while tuition has increased by 33 percent, according to the nonpartisan Center on Budget and Policy Priorities.

SUNY’s situation has been compounded by internal turmoil. In the 15 years before Dr. Zimpher’s arrival, SUNY had seven chancellors or acting chancellors, including a turbulent stretch around the time of Gov. Eliot Spitzer’s abrupt resignation, which included the withdrawal of some candidates.

“The effectiveness of the SUNY leadership since the early ’90s has not been great,” said Kenneth P. O’Brien, an associate professor of history at the College at Brockport and an editor of “SUNY at Sixty,” an analysis of the university’s history since its founding in 1948. “In some sense we have been gratified that the leadership that Chancellor Zimpher has provided has been rational, and that she has spoken up for the university.”

State Assemblywoman Deborah J. Glick, a Manhattan Democrat who is chairwoman of the Higher Education Committee, said Dr. Zimpher had not done enough to promote the individual strengths of some SUNY schools.

But over all, Ms. Glick said, Dr. Zimpher deserved much credit for raising SUNY’s reputation.”

Dr. Zimpher has served SUNY well in a state that historically has been very supportive of public higher education but since 2008 has followed a national trend of putting more of the financial burden of attending college on students and their families.