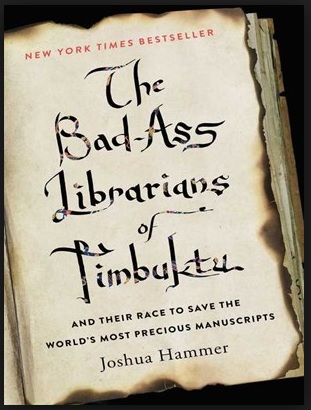 I have just finished reading The Bad-Ass Librarians of Timbuktu by Joshua Hammer.  The title is a bit distracting but the book itself is worth a read.  Hammer tells the story of how a small group of individuals took on the task of saving hundreds of thousands of ancient scrolls from possible destruction by invading militant jihadists.  The book is in three parts.

First, it tells of how Timbuktu became the cultural capital of sub-Saharan Africa.  Second, it provides accounts of the allure of militant jihadism to Muslim families who eke out hardscrabble existences and believe that when they give up their children to train as terrorists, they are “given them to God”.  Third, is the Herculean effort to move hundreds of thousands of scrolls out of Timbuktu to safety before jihadists could destroy them.  The hero of the story is Abdel Kader Haidara, a gentle, scholarly man who began gathering manuscripts in the 1980s on behalf of the Ahmed Baba Institute of Higher Learning and Islamic Research in Timbuktu.

Here is an excerpt from the New York Times book review that appeared on April 28, 2016.

“While Europe was still groping its way through the dark ages, Timbuktu was a beacon of intellectual enlightenment, and probably the most bibliophilic city on earth. Scientists, engineers, poets and philosophers flocked there to exchange and debate ideas and commit these to paper in hundreds of thousands of manuscripts written in Arabic and various African languages. The British historian Hugh Trevor-Roper once remarked: “There is only the history of Europeans in Africa. The rest is darkness.” Timbuktu’s staggering manuscript hoard is the most vivid proof of how wrong he was.

That ancient literary heritage, and the threat it faces from radical Islam, is the subject of Joshua Hammer’s book The Bad-Ass Librarians of Timbuktu, part history, part scholarly adventure story and part journalistic survey of the volatile religious politics of the Maghreb region.

Hammer delights in the explosion of medieval scholarship that took place in Timbuktu. By the 16th century, a quarter of the 100,000-strong population were students, drawn from as far away as the Arabian Peninsula. As one proverb puts it: “Salt comes from the north, gold from the south, and silver from the country of the white men, but the word of God and the treasures of wisdom are only to be found in Timbuctoo.” As well as religious texts, those treasures included works of poetry, algebra, physics, medicine, jurisprudence, magic, mathematics, history, botany, geography and astronomy. Ethicists debated polygamy, usury, conflict resolution and the ­morality of smoking…

The city’s scribes wrote in a variety of calligraphic styles, inks and colors: the African tradition of Hausa with thick brush strokes, the angled Kufic script from Persia and the curved and looping Maghrebi style. The city was a readers’ paradise, its inhabitants “searching with a real passion for volumes they did not possess, and making copies when they were too poor to buy what they wanted.” Eclectic scholarship thrived under the mystical, tolerant form of Sufism that dominated what is now Mali. The city, as Hammer puts it, was an “incubator for the richness of Islam.” But the tradition of open-­minded academic inquiry was also subject to periodic attack from bigots and looters, and the ­anti-intellectual rigidity of successive waves of jihadis.”

At two-hundred and seventy pages, it is a quick read but filled with interesting kernels of information about this part of the non-Western world.