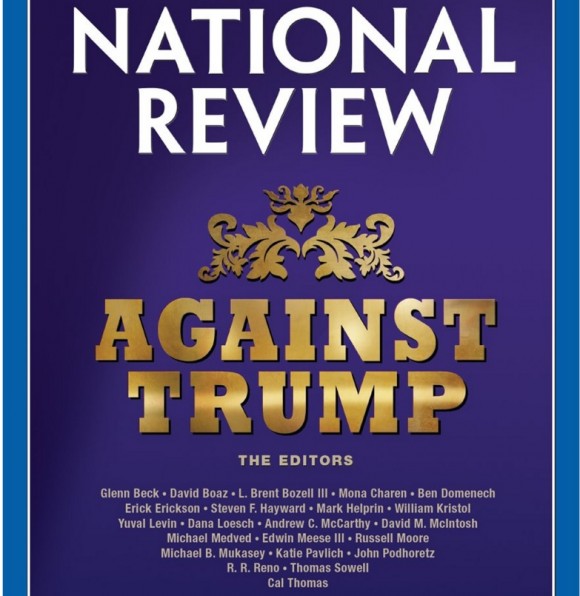 The National Review‘s special Trump issue, endorsed by twenty-three prominent conservatives, features a blistering editorial opposing his bid for the presidency and calling him a threat to conservatism.  Trump “is not deserving of conservative support in the caucuses and primaries. Trump is a philosophically unmoored political opportunist who would trash the broad conservative ideological consensus within the GOP in favor of a free-floating populism with strong-man overtones,” an article written by the Editors titled “Against Trump,” claims, adding that: “Trump’s political opinions have wobbled all over the lot.”

The editorial concludes with a stern warning to Republicans:

“Trump nevertheless offers a valuable warning for the Republican party. If responsible men irresponsibly ignore an issue as important as immigration, it will be taken up by the reckless. If they cannot explain their Beltway maneuvers — worse, if their maneuvering is indefensible — they will be rejected by their own voters. If they cannot advance a compelling working-class agenda, the legitimate anxieties and discontents of blue-collar voters will be exploited by demagogues. We sympathize with many of the complaints of Trump supporters about the GOP, but that doesn’t make the mogul any less flawed a vessel for them.

Some conservatives have made it their business to make excuses for Trump and duly get pats on the head from him. Count us out. Donald Trump is a menace to American conservatism who would take the work of generations and trample it underfoot in behalf of a populism as heedless and crude as the Donald himself.”

No doubt about the message in this editorial and sound advice for the Republican Party.