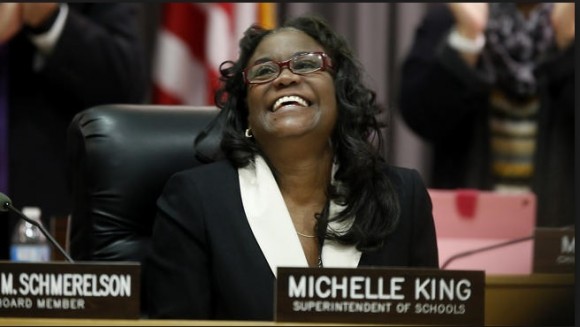 “For months, a high-profile head-hunting firm searched the nation for a new superintendent of the Los Angeles Unified School District. On Monday evening, the Board of Education gave the job to a candidate who was part of the district all along: Chief Deputy Supt. Michelle King.

Some education experts cheered the decision. Others winced. Few thought that finding a leader for the district was an easy task.

The school board had wanted a unanimous decision to emphasize strong support for a new leader, and members split over several finalists before uniting in a 7-0 vote for King.

Many in the district consider King, whose current district salary is $303,505, a reliable choice because she came up through the system.

“We didn’t know the long and winding road would lead us to our own door when we started,” said school board President Steve Zimmer. “It was the right road and the right door.”

King, 54, began her ascent into district leadership as a respected high school principal, then kept a low profile as a senior administrator. Her views on where she would like to take Los Angeles Unified remained a mystery — as is protocol within the $7-billion bureaucracy, at least for administrators who aren’t in charge.

But board members said they appreciated her knowledge of L.A. Unified, which, they concluded, would allow her to tackle the school system’s problems without delay.

She replaces Ramon C. Cortines, who retired Jan. 2 after serving three times as leader of the nation’s second-largest school system.

“The notion that an outsider could come in and, by dint of personality and power, turn this ship around has been manifestly unsuccessful for the last 15 years,” Kerchner said.

David Plank, a Stanford University professor and the executive director of Policy Analysis for California Education, said the selection of an outsider would have signaled an unrealistic expectation that someone new could solve the district’s problems. “It almost never happens,” Plank said.

David Rattray of the Los Angeles Area Chamber of Commerce said King’s deep experience with L.A. Unified as a student, teacher and administrator would ensure there would be no delay in moving forward. He said he had worked for years with King on such projects as reorganizing high schools into smaller learning communities and found her a “consummate team player” able to build relationships with students and parents, business and labor groups, and community members.”