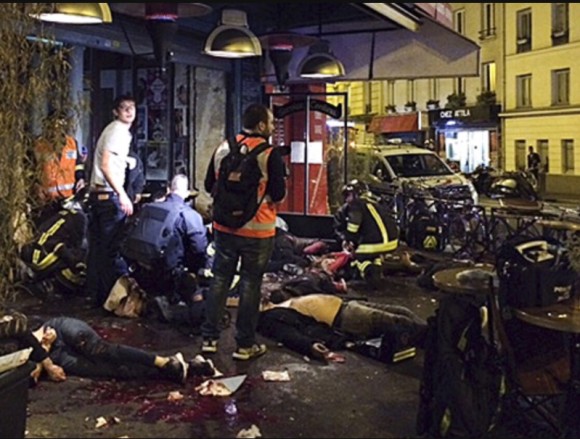 A series of attacks targeting young concert-goers, soccer fans and Parisians enjoying a Friday night out at popular nightspots killed at least 120 people in the deadliest violence to strike France since World War II. President Francois Hollande condemned it as terrorism and pledged that France would stand firm against its foes.  As reported by the Associated Press:

“The worst carnage was at a concert hall hosting an American rock band, where scores of people were held hostage and attackers ended the standoff by detonating explosive belts. Police who stormed the building encountered a bloody scene of horror inside.

When the attacks were over, eight attackers were dead – seven of them in suicide explosions, one killed by security forces in the music venue, Paris prosecutor’s spokeswoman Agnes Thibault-Lecuivre told The Associated Press.

Ambulances were seen racing back and forth in the area into the early hours of Saturday, and hundreds of survivors were evacuated in police buses. French television said Paris hospitals were overwhelmed with wounded.

News agencies quoted Michel Cadot, head of the Paris police, as saying early Saturday that all the assailants involved in shootings or bombings were believed to be dead, and the Paris prosecutor’s office said that eight attackers were dead, according to The Associated Press.

But the total number involved in the attacks, including accomplices still at large, remained unclear.

“We are going to try and determine what happened, determine what the profiles of these terrorists are, find out what their course of action was, find out if there are still accomplices or co-attackers,” said François Molins, the public prosecutor for Paris.

Within minutes, according to Paris police chief Michel Cadot, another group of attackers sprayed cafes outside the concert hall with machine gunfire, then stormed inside and opened fire on the panicked audience. As police closed in, three detonated explosive belts, killing themselves.

Another attacker detonated a suicide bomb on Boulevard Voltaire, near the music hall, the prosecutor’s office said.

Hollande, who had to be evacuated from the stadium when the bombs went off outside, later vowed that the nation would stand firm and united: “A determined France, a united France, a France that joins together and a France that will not allow itself to be staggered even if today, there is infinite emotion faced with this disaster, this tragedy, which is an abomination, because it is barbarism.”

In addition to the deaths at the concert hall, dozens were killed in an attack on a restaurant in the 10th arrondissement and several other establishments crowded on a Friday night, police said. Authorities said at least three people died when the bombs went off outside the soccer stadium.

All of the officials spoke on condition of anonymity because they were not authorized to be publicly named in the quickly moving investigation.

“This is a terrible ordeal that again assails us,” Hollande said in a nationally televised address. “We know where it comes from, who these criminals are, who these terrorists are.”

U.S. President Barack Obama, speaking to reporters in Washington, decried an “attack on all humanity,” calling the Paris violence an “outrageous attempt to terrorize innocent civilians” and vowing to do whatever it takes to help bring the perpetrators to justice.

Two explosions were heard outside the Stade de France stadium north of Paris during a France-Germany exhibition soccer game. A police union official, Gregory Goupil of the Alliance Police Nationale, whose region includes the area of the stadium, said there were two suicide attacks and a bombing that killed at least three people near two entrances and a McDonalds.

The blasts penetrated the sounds of cheering fans, according to an Associated Press reporter in the stadium. Sirens were immediately heard, and a helicopter was circling overhead.

France has heightened security measures ahead of a major global climate conference that starts in two weeks, out of fear of violent protests and potential terrorist attacks. Hollande canceled a planned trip to this weekend’s G-20 summit in Turkey, which was to focus in large part on growing fears of terrorism carried out by Islamic extremists.”

Our hearts are with the people of France! 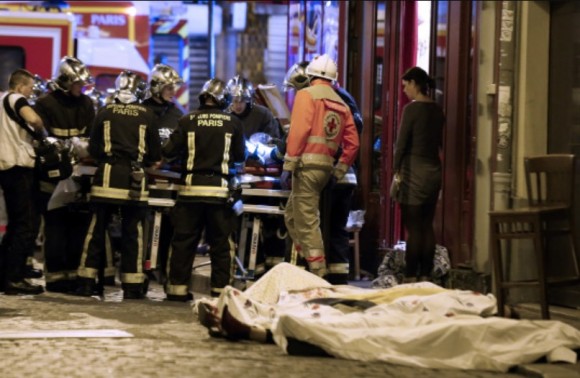