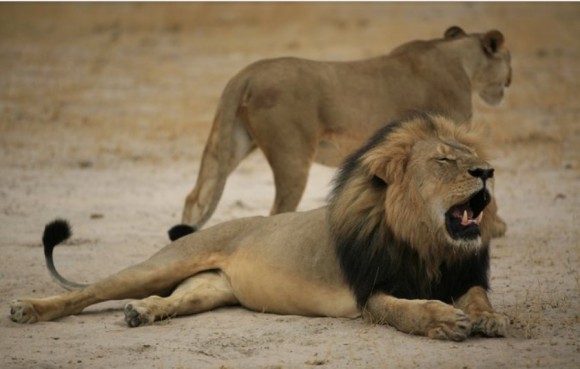 Here is today’s New York Times editorial on the killing of Cecil the lion by an American dentist from Minnesota.

The Death of Cecil the Lion

The death of Cecil, the black-maned lion killed by an American big-game hunter in Zimbabwe, has unleashed a global storm of Internet indignation. The hunter, Dr. Walter Palmer, a dentist from Minnesota, has been forced into hiding.

On the face of it, the reasons are not hard to discern: In an era of dwindling wildlife, proliferation of threatened species and large-scale poaching of elephants and other beasts, big-game hunting in Africa does not hold the allure it may have had in Teddy Roosevelt’s day. And Cecil was no ordinary cat.

The 13-year-old lion was a star attraction at the Hwange National Park in Zimbabwe, out of which the hunters lured him with a carcass, and he wore a collar by which scientists at the University of Oxford had been tracking him since 2008. It was wrong and, according to the Zimbabwe Conservation Task Force, illegal to kill Cecil. Dr. Palmer, who reportedly paid more than $50,000 for the hunt, said he relied on local guides and did not know it was an illegal hunt. An official at the United States Fish and Wildlife Service said the agency is also investigating the case.

Humans are very selective in their attitudes toward threatened species, and obviously Cecil, a beautiful beast, is the beneficiary of very selective attention. And while critics and non-hunters are repelled by the killing of beautiful animals simply for bragging rights, hunters are not the main reason for the decline in the population of African lions — about 30,000 today, down from 200,000 a century ago. The main threat, as to many other animals large and small, is a vanishing habitat. Some hunters argue that they help conservation through their efforts to maintain the habitats of their prey.

These debates will not be ended by Cecil’s cruel death, but maybe something important can come of the public outrage. It should refocus attention on the many species that are in danger, particularly elephants, rhinos and other beasts being destroyed for their tusks, horns and other parts. President Obama was right on his African trip to forgo the usual safari and instead to announce new legal measures to curtail the transport and sale of elephant ivory in the United States.

The fury over Cecil’s death should also prompt some soul-searching among hunters who pursue African game, a large number of whom are well-to-do Americans. In one particularly dreadful practice called “canned” hunting, private ranches raise lions purely to trot them out to be killed by “hunters” for trophies.

Australia has banned the importation of trophies from “canned” hunts, and Botswana for one has banned lion hunting (Zambia, however, lifted its ban on lion and leopard hunting in May). Such measures could help reduce the kills, but the survival of many species will require far more shared responsibility than nations and communities are currently willing to accept.