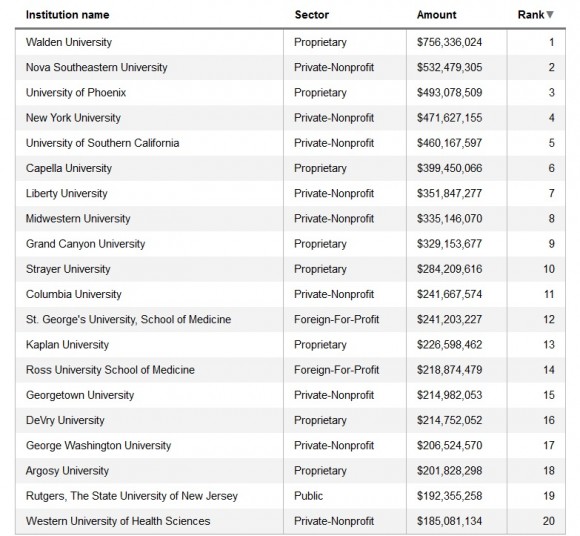 An analysis by the Center for American Progress reveals that a small group of institutions is responsible for a huge share of graduate-student debt. Of the total volume of graduate loans issued by the department, nearly one-fifth — $6.6 billion — went to one of just 20 institutions. What’s worse, the share of graduate-student debt emanating from those 20 institutions outstrips their share of enrollment. Together, the 20 colleges accounted for 12 percent of all graduate students but almost 20 percent of the loans. As reported in The Chronicle of Higher Education (subscription required):

“The 20 institutions that are leaders in graduate debt occupy significant yet different roles in higher education. But regardless of mission or type, they have capitalized on the growing demand for higher levels of education credentials, encouraging more debt in the process…
The disproportionate level of graduate-student debt at certain institutions has been enabled by policy choices. The Higher Education Act permits graduate students to borrow much more per year than what dependent undergraduate students may borrow. Graduate students may borrow up to $20,500 per year in direct Stafford loans and may supplement that borrowing with as much in graduate PLUS loans as their institution allows. Combine those two loan programs, and students can quickly accumulate $50,000 or more in debt a year, and are typically enrolled in multiyear programs.

Many students pursue graduate education to improve their employment prospects and earn higher salaries. But it appears that a majority of debt taken on to attend those institutions is not for costly law or medical degrees, but for nonterminal degrees. Among the 20 institutions responsible for the most graduate debt, 81 percent of graduate degrees conferred in the most recent year were master’s degrees. Borrowers should think carefully about how much debt should be required to achieve a level of education that is typically not the highest offered in a field of study.

The 20 institutions that are leaders in graduate debt occupy significant yet different roles in higher education. But regardless of mission or type, they have capitalized on the growing demand for higher levels of education credentials, encouraging more debt in the process.
Eight of the top 20 institutions in graduate-student loan debt are large colleges operated by publicly traded, for-profit education companies like the University of Phoenix, which is third on the list. Its graduate students borrowed $493 million last year. But even Phoenix pales in comparison to Walden University, whose $756 million in loans leads the nation in graduate-student debt. Walden, which is owned by Laureate Education and is expected to become publicly traded soon, focuses on graduate education, including teacher preparation; more than 80 percent of its students were enrolled in graduate programs in 2013.

Five prestigious nonprofit colleges make the list too, with two in Washington, D.C. (Georgetown University and George Washington University), two in New York City (NYU and Columbia University), and one in Los Angeles (University of Southern California). As at other universities on the list, most graduate students at those institutions earn master’s degrees, in disciplines like journalism, fine arts, government, and the sciences. Graduate students at those universities borrowed $207 million to $472 million.

Four universities focused on health care also make the top 20, but they’re not the prestigious medical schools one might expect. Ross University and St. George’s University, both foreign medical schools operating in the Caribbean, each make the list. Those institutions often recruit students whose scores don’t qualify them for admission to American medical schools, but enrollment at the Caribbean institutions offers a less-sure path for students whose goal is to practice medicine. Two others on the list — Western University of Health Sciences, in California, and Midwestern University, which operates campuses in Arizona and Illinois — focus on osteopathic medicine and other health-care fields, including dentistry, pharmacy, and nursing.

Only one public-university system, Rutgers University, makes the list, with $192 million in debt among its students.”

“Policy makers should consider how much graduate lending is sustainable and examine the value of graduate credentials. They should also think about the interplay between undergraduate and graduate borrowing, since students who carry loan balances from their undergraduate education can quickly find their monthly payments unmanageable if they add too much graduate debt.

Graduate education is associated with positive economic returns. But graduate programs should not force students to devote all of those hard-earned economic returns to servicing high loan balances. Amid the national concern about student loans, we must pay greater attention to the colleges that may be running away with graduate debt.”