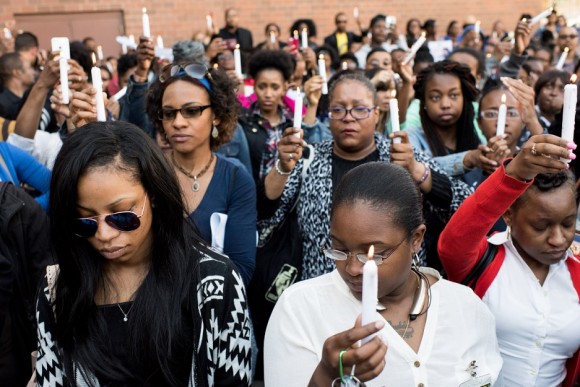 The New York Times has an article today about the victims of the Amtrak derailment outside of Philadelphia. The photo above was taken at a vigil that was held for our colleague, Derrick Griffith, at Medgar Evers College. Here is it what the article said about Derrick:

“An educator with a lifelong passion for helping the children of his native Bronx, who hated flying. He was glad to be taking the train….the tributes began and quickly multiplied. Former students of his at CUNY Prep, the alternative high school program he founded and ran for eight years, exchanged stories on Facebook of how “Mr. G” had changed their lives, pushing them out of troubled childhoods in the Bronx and into college.

College friends remembered how he seemed to be everywhere at the University of North Carolina at Charlotte, becoming the first African-American student body president to serve two terms on the majority-white campus. Medgar Evers’s president, Rudy Crew, recalled in a news conference on Thursday how fluidly his colleague could switch from street slang to academic formality, lacing it all with wit and a huge smile.

And they all recalled the driving force of his life: Mr. Griffith, 42, who was raised by a single mother in the Bronx and had successfully defended his Ph.D. dissertation on educating young black boys this spring, was determined to help young people transcend their backgrounds, just as he had.

All the while, he was raising his son as a single father and caring for his mother, who eventually moved in with him in Brooklyn. He talked openly to his teenage students about his impoverished childhood.