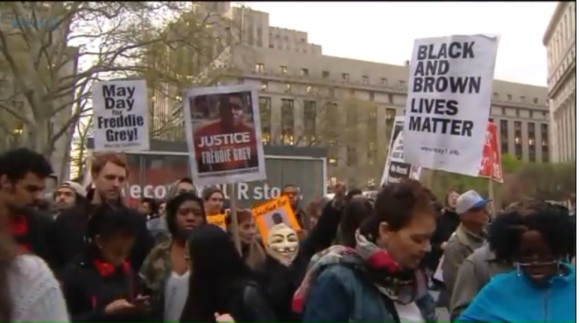 May Day marchers and protesters yesterday in U.S. cities demanded more rights for workers and immigrants and an end to police brutality. Rallies were held in Minneapolis, Minnesota Oakland, California, New York, Los Angeles, Seattle, and a number of other cities.  As reported in the Associated Press:

“In Chicago, some parents brought children to demonstrations to teach them how to interact with police officers. Meredith West, who is white, took her 9-year-old daughter to the protest, where many carried signs with slogans such as “Police Brutality Must Stop!”

“White people are not aware of police brutality that happens in the African American community,” she said.

While labor unions have long led demonstrations on International Workers’ Day, the marches got a boost in 2006 when stringent immigration legislation drove hundreds of thousands of demonstrators to rally in the streets. Since then, attendance in the annual rallies has been much smaller.

Some labor and immigrant advocates broadened their message this year to also address police brutality, joining a series of protests underway in several cities over the in-custody death of Freddie Gray in Baltimore. Six police officers were charged Friday in his death.

In Minneapolis, the group Black Lives Matter encouraged students to leave school, and some high school students did. They staged a die-in that briefly stopped local traffic.

Several hundred people marched in Oakland, California, with some holding signs saying “Racism is the Disease.” Others said they wanted better wages and working conditions for the masses.

In Los Angeles, a dozen protesters rallied before dawn to encourage the implementation of President Obama’s program to protect millions of immigrants in the country illegally from deportation.”