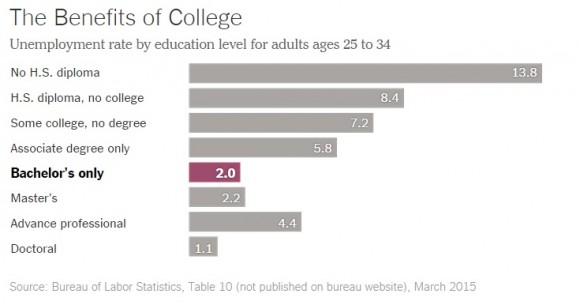 The New York Times today has a featured article on the benefits of a four-year college education.  Citing two recent studies, the conclusion is that there are clear benefits in terms of employment for those earning a college degree.  Even among “at risk” students,  the benefits are quite substantial compared to those who do not have a degree.  Here are several excerpts focusing on “at risk” students:

“How much money should taxpayers spend subsidizing higher education? How willing should students be to take on college debt? How hard should Washington and state governments push colleges to lift their graduation rates? All of these questions depend on whether a large number of at-risk students are really capable of completing a four-year degree.

… two separate — and ambitious — recent academic studies have looked at precisely this issue. The economists and education researchers tracked thousands of people over the last two decades in Florida, Georgia and elsewhere who had fallen on either side of hard admissions cutoffs. Less selective colleges often set such benchmarks: Students who score 840 on the SAT, for example, or maintain a C+ average in high school are admitted. Those who don’t clear the bar are generally rejected, and many don’t attend any four-year college.

Such stark cutoffs provide researchers with a kind of natural experiment. Students who score an 830 on the SAT are nearly identical to those who score an 840. Yet if one group goes to college and the other doesn’t, researchers can make meaningful estimates of the true effects of college.

And the two studies have come to remarkably similar conclusions: Enrolling in a four-year college brings large benefits to marginal students.

Roughly half of the students in Georgia who had cleared the bar went on to earn a bachelor’s degree within six years, compared with only 17 percent of those who missed the cutoff, according to one of the studies, by Joshua S. Goodman of Harvard and Michael Hurwitz and Jonathan Smith of the College Board. The benefits were concentrated among lower-income students, both studies found, and among men, one of them found.

…Perhaps most important, the data show that the students just above the admissions cutoff earned substantially more by their late 20s than students just below it — 22 percent more on average, according to the Florida study, which was done by Seth D. Zimmerman, a Princeton economist who will soon move to the University of Chicago. “If you give these students a shot, they’re ready to succeed,” said Mr. Zimmerman, adding that he was surprised by the strength of the findings.”

“…his new book on inequality, “Our Kids,” is a lamentation. In past decades, Mr. Putnam argued, the United States made a series of investments that essentially treated children as everyone’s children. The best example was the rise of universal high school in the 20th century, an expensive undertaking that did not directly benefit many taxpayers.

Back then, a high school education was the new ticket to the middle class. Today, a college education is. And when it comes to people’s own children, there is remarkably little disagreement about the value of college, even when it requires taking on debt. Affluent, middle-class and lower-income parents alike, in overwhelming numbers, aspire for their children to finish college.

Americans agree that “our kids” should go to college. The debate is really about who qualifies as “our kids.”

The key question:  Is America ready for college for the masses?  I say we are!