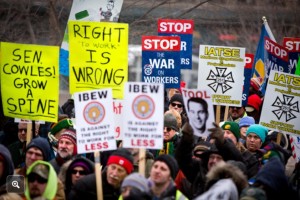 Hundreds of union members in hard hats and work boots waved signs under falling snow, denouncing Gov. Scott Walker and his fellow Republican lawmakers outside the Capitol building yesterday. As reported in the New York Times:

“As Mr. Walker builds a presidential run on his effort to take on unions four years ago, he is poised to deliver a second walloping blow to labor. After saying for months that an effort to advance so-called right-to-work legislation would be “a distraction” from dealing with larger issues like the state’s economy and job growth, Mr. Walker is now preparing to sign a measure — being fast-tracked through the Republican-held State Legislature — that would bar unions from requiring workers to pay the equivalent of dues.

The State Senate passed the bill, 17 to 15, mostly along party lines, Wednesday night after about eight hours of debate. As the results were announced and senators left the chamber, protesters chanted “Shame” from the balcony. The State Assembly is expected to take up the measure next week. Where Mr. Walker’s earlier high-profile strike against labor cut collective bargaining rights for most public-sector unions, this one is aimed at workers in the private sector. And where Mr. Walker led the drive in 2011, he has taken a far less publicly forceful role this time, saying only that he will sign a bill. Yet the political effect will be the same, burnishing Mr. Walker’s record as an unafraid foe of Big Labor, who has been able to prevail in a state where Democrats have won presidential elections.”