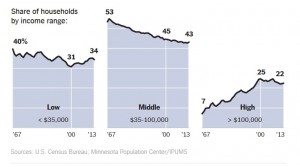 The American middle class,  defined as households making between $35,000 and $100,000 a year, shrank in the final decades of the 20th century because more Americans moved up into what might be considered the upper middle class or the affluent. Since 2000, however, the middle class has been shrinking for the more alarming reason: Incomes have fallen.  As reported in the New York Times:

“The middle class that President Obama identified in his State of the Union speech last week as the foundation of the American economy has been shrinking for almost half a century.

In the late 1960s, more than half of the households in the United States were squarely in the middle, earning, in today’s dollars, $35,000 to $100,000 a year. Few people noticed or cared as the size of that group began to fall, because the shift was primarily caused by more Americans climbing the economic ladder into upper-income brackets.

But since 2000, the middle-class share of households has continued to narrow, the main reason being that more people have fallen to the bottom. At the same time, fewer of those in this group fit the traditional image of a married couple with children at home, a gap increasingly filled by the elderly.

This social upheaval helps explain why the president focused on reviving the middle class, offering a raft of proposals squarely aimed at concerns like paying for a college education, taking parental leave, affording child care and buying a home.

Still, regardless of their income, most Americans identify as middle class. The term itself is so amorphous that politicians often cite the group in introducing proposals to engender wide appeal.

The definition here starts at $35,000 — which is about 50 percent higher than the official poverty level for a family of four — and ends at the six-figure mark. Although many Americans in households making more than $100,000 consider themselves middle class, particularly those living in expensive regions like the Northeast and Pacific Coast, they have substantially more money than most people.

However the lines are drawn, it is clear that millions are struggling to hang on to accouterments that most experts consider essential to a middle-class life.”

This is an alarming trend and there is little on the horizon that will reverse it.  Even though the economy has improved and unemployment is down  since the Great Recession in 2008, there are too many people who are underemployed, housing prices are stagnant,  and there is still a good deal of debt. Not a good situation for our country unless of course one happens to be in the upper class.