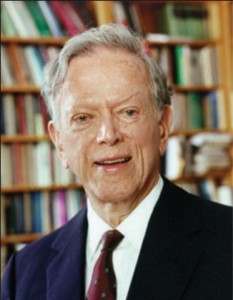 Patrick Suppes who was probably the most significant figure in the development of computer-based learning in the 20th century, died at his home on Stanford University’s Campus on November 17th. I met him once after he spoke at a conference in the early 1980s. He saw computer-assisted instruction or CAI as the wave of the future for education. In 1977, while at Medgar Evers College, I was involved with building a CAI Lab based on software he developed and marketed through Computer Curriculum Corporation (CCC). The CAI software was way ahead of its time but unfortunately the hardware and underlying software platforms in the 1970s especially for presenting media were problematic.  It would take a couple of decades for the technology to catch up with his vision. Below is his New York Times obituary.

Almost a decade before the invention of the personal computer, Patrick Suppes, a Stanford philosopher, sketched a vision of the democratic future of computerized education.

“In a few more years,” he predicted in 1966, “millions of schoolchildren will have access to what Philip of Macedon’s son Alexander enjoyed as a royal prerogative: the personal services of a tutor as well informed and as responsive as Aristotle.”

Dr. Suppes, who died on Nov. 17 at 92, was not just prescient, however; he was also instrumental in bringing about the future he foresaw — one in which students would have instant access to vast stores of knowledge through their computerized “tutors.”

After joining the Stanford philosophy department in 1950, he went on to found, in 1967, the Computer Curriculum Corporation, which pioneered the computerized learning movement.

Dr. Suppes died at his home on the Stanford campus, not far from the university’s Suppes Center for History and Philosophy of Science, said Michael Friedman, the center’s founding director and a philosophy department colleague.

In his 64 years at Stanford, Dr. Suppes (pronounced SOUP-peas) influenced a wide range of academic fields, among them logic, physics and psychology. Educated in the same intellectual traditions of pragmatism and empiricism as his Harvard contemporary W. V. Quine, a giant of 20th-century philosophy, he helped create Stanford’s Institute for Mathematical Research in the Social Sciences, which he directed from 1959 to 1992.

The Computer Curriculum Corporation was the first company to pursue interactive computer-assisted learning in the classroom. The company commercialized earlier research that Dr. Suppes had done in teaching set theory, a branch of mathematical logic, to elementary school students.

“He was really a pioneer in the idea that computers could bring some kind of assistance to the classroom,” said Adele Goldberg, who studied with Dr. Suppes as a graduate student and worked with him as a research associate at the institute. From 1992 to 2010, he directed Stanford’s Education Program for Gifted Youth. He taught at the university as recently as last spring.

During the 1960s, Dr. Suppes used computers in experiments that crossed income, class and color lines in an effort to accelerate classroom learning.

“In his computer-assisted learning, Pat was especially proud of its egalitarian and non-elitist character, insofar as students of any and all abilities and backgrounds had the same chance of improving their knowledge,” Dr. Friedman said.

Patrick Colonel Suppes was born in Tulsa, Okla., on March 17, 1922. His father was an independent businessman in the oil industry, and his mother died when he was 4. His stepmother encouraged him in a variety of intellectual interests, in spite of his father’s hope that he would join the family oil business.

His stepmother’s interest in Christian Science led to Dr. Suppes’s own interest in philosophy. He attended public schools in Tulsa and began college at the University of Oklahoma in 1939. After a year, he transferred to the University of Chicago, where he received an undergraduate degree in meteorology in 1943.

Called to active duty in the Army Reserve that year, he served in the Pacific as a meteorologist and had been promoted to captain by the time he was discharged in 1946. He earned a Ph.D. in philosophy at Columbia University in 1950. In 1990, President George Bush awarded him the National Medal of Science.

In 2002, Dr. Suppes published “Representation and Invariance in Scientific Structures,” a book that the university said represented the culmination of his work.

In 2012, Stanford’s Center for the Study of Language and Information held a conference in honor of his 90th birthday. Scholars in a variety of philosophical and scientific fields contributed papers for the occasion, and they have been collected in a forthcoming book titled “Foundations and Methods From Mathematics to Neuroscience: Essays Inspired by Patrick Suppes.”

The university said that an advance copy of the book was to be laid in Dr. Suppes’s coffin.