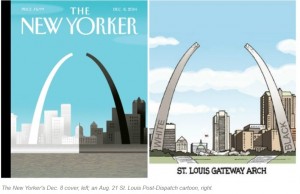 The past several days have seen demonstrations and marches from coast to coast over the Ferguson grand jury decision. Yesterday, protesters in New York City and Seattle disrupted shopping in department stores that were open for Black Friday sales. The racial divide that underlies the decision and much of the social fabric of our country has been captured in several images, the most recent one being the December 8, 2014 cover of The New Yorker. As reported in Yahoo News:

“The New Yorker’s Dec. 8 issue features a powerful cover illustration by Bob Staake of St. Louis’ Gateway Arch, shown broken and divided by color — one side black, the other white.

“I wanted to comment on the tragic rift that we’re witnessing,” Staake told the New Yorker, which published the cover on the magazine’s website Wednesday. “I lived in St. Louis for seventeen years before moving to Massachusetts, so watching the news right now breaks my heart. At first glance, one might see a representation of the Gateway Arch as split and divided. But my hope is that the events in Ferguson will provide a bridge and an opportunity for the city, and also for the country, to learn and come together.”

Staake’s illustration is strikingly similar to one R.J. Matson, syndicated editorial cartoonist at the St. Louis Post-Dispatch, drew in August. “It’s the first time I’m seeing an editorial cartoon by my colleague R.J. Matson that also references a broken Gateway Arch to symbolize Saint Louis,” Staake wrote on Facebook. “When I thought up my idea, I recalled all those famous black and white photos of the incomplete arch being built. To the extent that we both came up with similar ideas, I’m reaching out to him, hoping we can join forces to spread the message of repairing what’s so badly broken in Ferguson.”

In Ferguson and elsewhere!