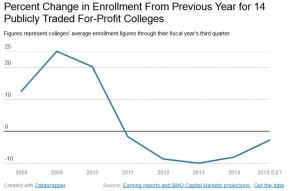 For-profit colleges have had several very difficult years in terms of student enrollments and earnings. Dozens of colleges saw double-digit drops in enrollment, and in 2012 a U.S. Senate committee released a damning report on the for-profit-college sector, concluding that some colleges had dropout rates above 50 percent and that the industry was spending more on marketing than it was on instruction. However, new enrollment data suggest things may soon be looking up for the sector. Analysts’ projections suggest the industry is close to “bottoming out” and could once again see student growth. As reported in The Chronicle of Higher Education:

“To get an idea of what’s coming next, The Chronicle analyzed earnings reports and analyst projections for 14 publicly traded higher-education institutions, which together make up about half of the sector’s enrollment of two million students. The analysis found that, though enrollment dropped again in 2014, the forecast is for a smaller decline in 2015 and then enrollment increases thereafter. Indeed, several companies that were posting double-digit enrollment losses for the last four years are expected to post gains in 2015.”

The article specifically comments on the Apollo Group (Universitty of Phoenix) likening it to the 800-pound gorilla in the room:

“Even though some for-profit colleges are projected to have upticks in enrollment next year, the industry’s leader, the Apollo Education Group—the operator of the University of Phoenix—is projected by BMO to post enrollment losses in each quarter next year.

“Apollo, until recently, was declining at double digits, now it’s single digits, which is close to the industry trend,” Mr. Silber said. “It’s the 800-pound gorilla in the industry, and it will take a little time to catch up.”

The for-profit colleges have a place in American higher-education. It is unfortunate that several of them had substituted profit motives over the needs of their students. It remains to be seen how it works out for them.