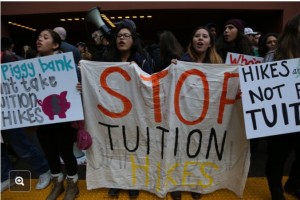 Over the protests of hundreds of angry and chanting students, a panel of the University of California Board of Regents gave preliminary approval yesterday to a plan to raise tuition 27.6 percent over five years, turning aside a last-ditch effort by Gov. Jerry Brown to block it. As reported in The New York Times:

The day unfolded as a showdown between Mr. Brown, who holds himself out as a force for fiscal restraint, and Janet Napolitano, the president of the university system, who has insisted that only more money from the state can head off the tuition increase. Mr. Brown has countered that if the regents went ahead with the increase, they would get less from Sacramento, not more, and he bolstered his position by appointing two allies this week to vacant seats on the board.

But even as sign-waving protesters tried to block entrances to the building, which led to shoving and jostling as officials tried to make their way in, Ms. Napolitano got her way: Under the plan, undergraduate tuition and fees for California residents would rise from $12,192 a year to as much as $15,560 in 2019-20.”

Versions of California’s higher education battles have been playing out in states across the country in recent years. State governments slashed support for public universities during the recession, driving big tuition increases and drawing criticism from political leaders. In several states, university administrators have frozen tuition, while protesting that they are still underfunded by their states.