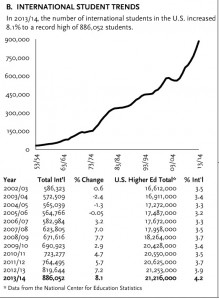 American colleges and universities are attracting more international students than any other time in their history. In 2013-14, colleges in the United States enrolled a record 886,052 foreign students, an increase of 8 percent over the previous year, according to the latest “Open Doors” report from the Institute of International Education. As reported by The Chronicle of Higher Education:

While the boom in students from abroad is longstanding and well known, dig deeper into the data and you’ll find several trends that have implications for how colleges recruit overseas and create opportunities for American students to study abroad.

China remains the dynamo of global-student mobility, at times driving up international enrollments all by itself. In 2013-14, Chinese students accounted for almost 60 percent of the foreign-student growth at American colleges. Think about it this way: One of every three international students in the United States holds a Chinese passport…

The fast-growing group of student-visa holders aren’t seeking bachelor’s degrees or Ph.D.’s. They aren’t learning to speak in English. In fact, they aren’t actually studying at all.

They are part of a program known as Optional Practical Training, a designation that allows international students to temporarily stay and work in the United States after graduation.

More than one in 10 international students is on OPT, as the program is known, up 12 percent, the fourth consecutive annual increase.

Part of the growth is simply a result of the boom in international students, says Rajika Bhandari, deputy vice president for research and evaluation at the Institute of International Education. OPT is popular with foreign graduates whose employment options are limited during their studies and seize the opportunity to gain work experience for the job market when they return home.

The program is popular with some employers as well, particularly in Silicon Valley.

Having fallen short in efforts to change visa rules to make it easier for foreign graduates to stay in the United States, the Obama administration has extended the time that students in high-demand science and technology fields can remain in the country on OPT, from 12 to 29 months.”

This is an important trend that one, validates the quality of American higher education and two, provides an important cultural dynamic for those colleges that have a sizeable international student population.