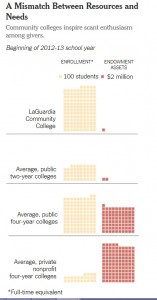 Using LaGuardia Community College as a case study, the New York Times has a featured article on the difficulties community colleges have in attracting private giving. The chart above says it all. Community colleges, a critical sector in American higher education generally rely extensively on public funding and student tuition. They attract very little private giving yet serve students with the greatest needs. As the article mentions:

“The chief impediments to fund-raising at community colleges are the most obvious ones: There is no base of well-off alumni from which to draw, and no accompanying reserve of pride that might be exploited. Community colleges are places of departure rather than arrival. A gilded education begets more privilege, and privilege itself has had a long tradition of expression in munificent reciprocal giving. At community colleges, there exists not a legacy culture but whatever might be considered its opposite, given that the ambition of anyone who makes it through the system successfully is to send a child somewhere far beyond it. When students from a community college ascend to the affluent classes, they tend to feel a stronger affinity to the institutions that eventually graduate them than to the places where, often, they had no option but to begin.

The larger and more profound challenge is the marketing of the mission itself — the entirely worthy but unglamorous cause of moving poor young adults, many of whom have been inadequately educated, up to the ranks of middle-income earners. How to sell this vision to the broader world?

The plight of community colleges has not captured the interest of the wealthy donor class, where the narrative of the young child plucked from poverty and channeled through a system that will get him to Princeton and repackage him in the image of his benefactors has proved to be so mythically compelling. In 2012, more than twice as much money — $297 million — was awarded to charter schools from the country’s largest foundations as was given to community colleges, even though two-year colleges educate nearly four times as many students.”

Community colleges are jewels of American higher education and have the most difficult missions of any of our postsecondary institutions. They should be celebrated and deserve the attention of America’s donors and foundations.