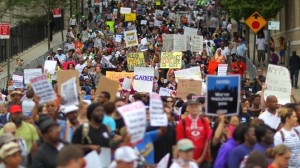 Several thousand marchers converged in northeast Staten Island to protest the choking death of Eric Garner who was in the custody of police officers trying to arrest him for selling loose cigarettes. The protesters chanted “I can’t breathe” — Mr. Garner’s words as he struggled with officers — mixed with those borrowed from Ferguson: “Hands up, don’t shoot.”

As reported in the New York Times:

“For days, march organizers and Mayor Bill de Blasio emphasized that the demonstration on Staten Island would not devolve into the sort of violent confrontation with police officers that had plagued the protests over the death of the Ferguson teenager, Michael Brown. By late afternoon, the march had ended and the crowds were heading home. The police said all had been quiet and there had been no arrests.

Indeed, for both police officials and the Rev. Al Sharpton, who led the march, the demonstration served as a kind of protest by example for how to respond forcefully but peacefully amid accusations of police misconduct.

“We are not here to cause riots; we are here because violence was caused,” Mr. Sharpton said at a rally after the march. But, he said, “we are not against the police.”