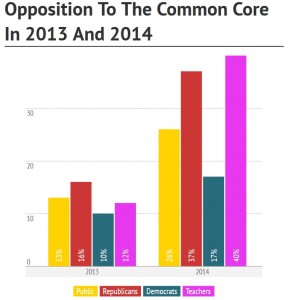 Teachers and Republicans are losing faith in the Common Core State Standards, the national education guidelines adopted by a majority of states. As reported in The Huffington Post:

“According to a poll out today by Education Next, a quarterly education journal from Stanford University’s Hoover Institution, 40 percent of teachers said they opposed the Common Core — more than triple the 12 percent who said they were against the standards in 2013.

Public opposition to the Common Core also has increased. While 65 percent supported the Common Core in 2013, a slim majority — 53 percent — expressed approval in 2014. Broken down by party lines, Republicans were much more likely to have switched their opinion than Democrats.

The standards were developed in an effort to make sure students around the country are being held to the same guidelines. While the federal government encouraged states to adopt higher standards in 2010 with Race to the Top money, many states adopted them without incentives. Conservatives have taken to calling the standards an example of federal overreach.”

There is an interesting dynamic evolving around the country concerning teachers/their unions and political parties. The NEA and AFT have traditionally supported the Democratic Party both at national, state, and local levels. The Common Core as well as several other issues such as charters schools and teacher tenure are creating wedges between teacher unions and the Democrats. For example, the NEA has called on the resignation of Arnie Duncan, President Obama’s secretary of education.

And earlier this month, the New York State United Teachers decided that it was not endorsing Democrat incumbent Andrew Cuomo for governor — even while backing the two other statewide Democrats running for re-election, Comptroller Tom DiNapoli and Attorney General Eric Schneid­erman.

The union was upset at the governor for his new teacher-evaluation system, which initially tied teacher evaluations to the state’s controversial Common Core standardized tests. Cuomo’s championing of charter schools also didn’t go over well with the union.

It will be interesting to see how this plays out. It is not likely to push teachers unions around the country en masse to the Republicans but in close elections especially at the state and local level, there can be some concerns for Democratic candidates who favor the Common Core.