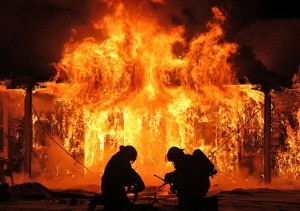 In most places in America, when a fire breaks out, a volunteer shows up to put it out. But the ranks of volunteers are dwindling. What was once an iconic part of American life is losing its allure, in part because the work — some would say the calling — is a lot less fun than it used to be. A New York Times article yesterday describes the plight of volunteer fire companies around the country. Here is an excerpt:

“There are still more than twice as many volunteers as career firefighters. But the number of volunteers has dropped by around 11 percent since the mid-1980s, while the number of career firefighters has grown more than 50 percent, according to the National Fire Protection Association. The allure has diminished because fund-raising now takes up roughly half the time most volunteers spend on duty. It’s also harder to fit in volunteer work. The rise in two-income households often means that there is no stay-at-home parent to run things so the other can dash off for an an emergency. Urbanization and the aging of the rural population are taking their toll as fewer young people are available to replace firefighters who retire.

Federal, state and local officials would like to attract new volunteer recruits. The stakes are particularly high because volunteers save not only lives but money — more than $139.8 billion annually for local governments, according to the fire protection association. The time and training needed to become a certified firefighter have also increased. Federal standards enacted to save firefighters’ lives have unintentionally created a barrier for volunteer service: It now takes hundreds of hours to be certified, and new firefighters often must cover the cost of training.

Other costs are also contributing to the dwindling of the ranks. Since the 1980s, the price of a single self-contained breathing apparatus has jumped to over $5,000, from $900. A fire engine costs $400,000 more than it did 30 years ago. In surveys, firefighters consistently cite the endless burden of fund-raising, which takes up to 60 percent of their work time, as one of the biggest deterrents to staying on the job.”

I have been a volunteer fireman for thirty-two years and have held all of the firematic officer positions from lieutenant through chief and currently am a fire commissioner involved with the business side of a our fire company. When I joined the volunteers in 1982, there were 30-35 active firefighters who could respond to emergencies. Not there are fewer than 15. This scenario as the article states is playing itself out all over the country. Sadly, a great American institution is fading away.