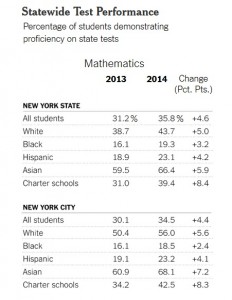 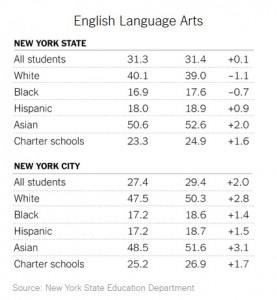 The New York State Education Department released the scores on this year’s statewide English language arts and math exams yesterday. New York State students in grades 3 through 8 had taken the tests in April and May. The results showed a slight improvement from 2013, the first year the exams were aligned with the Common Core State Standards. Overall, most students are still not reaching proficient levels in math or English.

In New York City, students made little headway on both exams. The number of students passing the reading exam increased to 29 percent, from 27 percent, while in math, the city’s rate rose about four percentage points to 34 percent from last year, when 30 percent passed. Black and Hispanic students improved slightly, but there remained a significant gap between their scores and those of white and Asian students.

New York was one of the first states to introduce tests aligned with the Common Core, and the sharp decline in students’ test scores last year contributed to a statewide backlash against the new standards. In 2012, the last year of the easier tests, 55 percent of the state’s students passed the reading test, and 65 percent passed in math.

The teachers’ union charged that educators had not been adequately trained, and some parents asked whether the tests were simply too hard.

In response to urging from the union, the State Legislature in June passed a bill to mitigate the effect of the scores on teachers’ evaluations, preventing educators from being fired or denied tenure in the coming school year based on their students’ scores.

As I have stated before on this blog, the Common Core Curriculum is not the problem. The problem is that it was poorly implemented in New York and there was too much emphasis on testing the Common Core rather than developing  curriculum materials and training teachers to use them effectively.