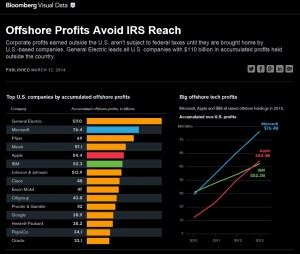 Coming on the day after President Obama voiced his own opposition to a tax-avoidance scheme called an inversion, in which a U.S. company establishes or merges with a foreign company and moves its headquarters overseas to avoid paying U.S. taxes, Mark Cuban, the billionaire investor and owner of the NBA’s Dallas Mavericks, took to Twitter yesterday to shame companies for making these moves.   His message:

“If I own stock in your company and you move offshore for tax reasons I’m selling your stock. There are enough investment choices here!”

Cuban’s call comes as President Obama is putting pressure on Congress to close this tax loophole. By some estimates, as much as $2 trillion in corporate cash is sitting outside the U.S.—money that could otherwise be reinvested at home to expand domestic operations and create more jobs. GE, Apple, Microsoft and others top the list of companies with the most money offshore.

Can we hear from Bill Gates!