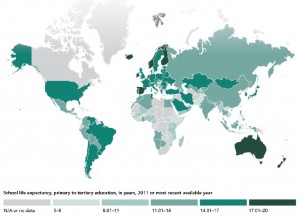 On average, kids in Australia can expect to spend up to 15 more years in school than kids in Niger.

A new report from Cornell University, international business school INSEAD and the World Intellectual Property Organization looks, in part, at global “school life expectancy,” that is to say, how many years students around the world can expect to spend in school. Titled “The Global Innovation Index 2014,” the report shows wide variations in school life expectancy around the world.