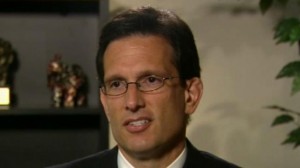 In one of the most stunning primary election upsets in congressional history, the House majority leader, Eric Cantor, was soundly defeated on Tuesday by a Tea Party-backed economics professor who had hammered him for being insufficiently conservative.   As reported in the New York Times:

“The result delivered a major jolt to the Republican Party — Mr. Cantor had widely been considered the top candidate to succeed Speaker John A. Boehner — and it has the potential to change both the debate in Washington on immigration and, possibly, the midterm elections.
With just over $200,000, David Brat, a professor at Randolph-Macon College in Ashland, Va., toppled Mr. Cantor, repeatedly criticizing him for being soft on immigration and contending that he supported what critics call amnesty for immigrants in the country illegally.
During a short concession speech late Tuesday, Mr. Cantor did not try to analyze his defeat or cast blame, saying only that he knew he had disappointed his supporters.

In victory, Mr. Brat said that his candidacy had resonated with voters who believed that politics had been dumbed down by partisan infighting.

“The American people want to pay attention to serious ideas again,” Mr. Brat said, speaking on Fox News. “Our founding was built by people who were political philosophers, and we need to get back to that, away from this kind of cheap political rhetoric of right and left.” He will face Jack Trammell, a Democrat who is also a professor at Randolph-Macon, this fall in the heavily Republican district.