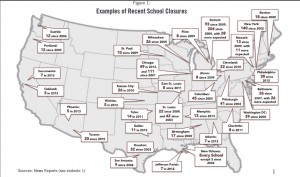 The Huffington Post has an article on a new report from the Journey For Justice Alliance calling out charter school advocates and school reformers for proliferating widespread public school closings which have disproportionately affected black and Latino children.

The Journey for Justice Alliance  has partnered with the Advancement Project to file three federal complaints with the Education Department’s Office of Civil Rights, alleging that the impact of school shutdowns is racially discriminatory and thus violates Title VI of the Civil Rights Act. The complaints are also backed by the nation’s two largest teachers’ unions.

According to their report, New York, Detroit, and Chicago — cities with large minority populations — have in recent years each closed  more than 100 public schools despite mass demonstrations and community protests. Here is the overview from the Report:

“We, the members of Journey for Justice, are comprised of thousands of youth, parents, and other concerned citizens from communities of color across the United States. We write this report because we need the American people to know that the public education systems in our communities are dying. More accurately, they are being killed by an alliance of misguided, paternalistic “reformers,” education profiteers, and those who seek to dismantle the institution of public education. Some are being killed quickly; others are still in the early stages. But it is, at this point, quite clear that there will soon be little to nothing left of our public school systems – and many more like ours – unless current trends are disrupted.

As can be seen in Figure 1, America’s predominantly Black and Latino communities are experiencing an epidemic of public school closures. For example:

This type of action is long overdue. Many urban school districts in the United States have unbridled enthusiasm for closing neighborhood schools and replacing them with charter schools that have little ties to the community.  Furthermore, most of these charters do no better in student performance than the public schools they replaced.