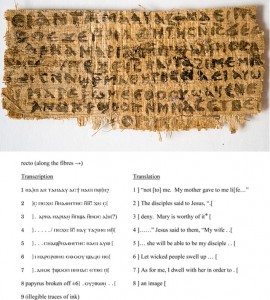 On this Palm Sunday, it might be an appropriate time to consider whether  Jesus Christ was married.   Harvard Divinity School professor Karen L. King says she has found an ancient papyrus fragment from the fourth century that, when translated, appears to indicate that Jesus was married.  The text is being dubbed “The Gospel of Jesus’ Wife.” The part of it that’s drawing attention says, “Jesus said to them, ‘my wife'” in the Coptic language. The text, which is printed on papyrus the size of a business card, has not been scientifically tested to verify its dating, but King and other scholars have said they are confident it is a genuine artifact.

“Christian tradition has long held that Jesus was not married, even though no reliable historical evidence exists to support that claim,” King said at a conference in Rome on Tuesday. “This new gospel doesn’t prove that Jesus was married, but it tells us that the whole question only came up as part of vociferous debates about sexuality and marriage. From the very beginning, Christians disagreed about whether it was better not to marry, but it was over a century after Jesus’s death before they began appealing to Jesus’ marital status to support their positions.”

King, who focuses on Coptic literature, Gnosticism and women in the Bible, has published on the Gospel of Judas and the Gospel of Mary of Magdala. She presented her research Tuesday evening in Rome, where scholars are gathered for the International Congress of Coptic Studies.

The idea that Jesus was unmarried and chaste is largely accepted by Christian denominations and a reason for the practice of celibacy among Roman Catholic priests.

“Beyond internal Catholic Church politics, a married Jesus invites a reconsideration of orthodox teachings about gender and sex,” said journalist and author Michael D’Antonio, who writes about the Catholic Church, in a blog on The Huffington Post. “If Jesus had a wife, then there is nothing extra Christian about male privilege, nothing spiritually dangerous about the sexuality of women, and no reason for anyone to deny himself or herself a sexual identity.”

The DaVinci Code anyone!