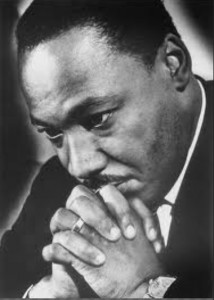 At 6:05 P.M. on Thursday, April 4th, 1968, Martin Luther King was shot dead while standing on a balcony outside his second-ﬂoor room at the Lorraine Motel in Memphis, Tennessee.  The night before his death, Dr. King spoke prophetically of his own death, noting the threats he was receiving.

“I don’t know what will happen now; we’ve got some difficult days ahead. But it really doesn’t matter to with me now, because I’ve been to the mountaintop. And I don’t mind,” he said. “Like anybody, I would like to live a long life–longevity has its place. But I’m not concerned about that now. I just want to do God’s will. And He’s allowed me to go up to the mountain. And I’ve looked over, and I’ve seen the Promised Land. I may not get there with you. But I want you to know tonight, that we, as a people, will get to the Promised Land.”