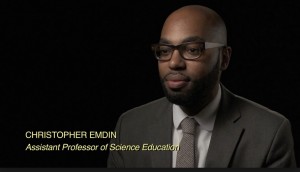 Chris Emdin, a graduate of our PhD Program here at the CUNY Graduate Center, was recently named a White House STEM Diversity and Access “Champion of Change”.    While in our program, Chris was mentored by Professor Ken Tobin.  Congratulations to both Chris and Ken for this honor.  The full text of The White House press release is below.

WASHINGTON, DC – On Wednesday, February 26, 2014, the White House will honor ten local heroes who are “Champions of Change” for their innovation in creating diversity and access in STEM fields.  These champions are creating opportunities for young people typically underrepresented in STEM industries by using unconventional approaches to enhance student exposure ranging from photography and film, to Hip Hop music, to coding competitions and community-based workshops.

President Obama issued an executive order creating the White House Initiative on Educational Excellence for African Americans to help restore the United States to its role as the global leader in education; strengthen the Nation by improving educational outcomes for African Americans of all ages; and ensure that American child receives a complete and competitive education that prepares them for college, a successful career, and productive citizenship.  As part of National African American History Month, the White House Initiative  is proud to honor these leaders for the work they do to make these goals a reality and to ensure even our youngest children become not only consumers in our global economy, but also creative innovators themselves.

The Champions of Change program was created as an opportunity for the White House to feature individuals, businesses, and organizations doing extraordinary things to empower and inspire members of their communities.

Christopher Emdin, Ph.D is an Associate Professor of Science Education at Teachers College, Columbia University, where he also serves as Director of Science Education at the Center for Health Equity and Urban Science Education. He is also a fellow at the W.E.B. DuBois Research Institute at Harvard University. In these roles, he prepares teachers for STEM classrooms, conducts research in urban science education, and coordinates both the Science Genius B.A.T.T.L.E.S. and the #HipHopEd social media movement. The Science Genius B.A.T.T.L.E.S. are focused on bringing attention to transforming teaching, learning, and engagement in science by using hip-hop culture to create science competitions among youth in New York City Public schools. The #HipHopEd movement focuses on engaging the public in conversations about the intersections of hip-hop and education. Dr. Emdin writes the provocative “Emdin 5” series for the Huffington Post. He is also author of the award winning book, Urban Science Education for the Hip-hop Generation.